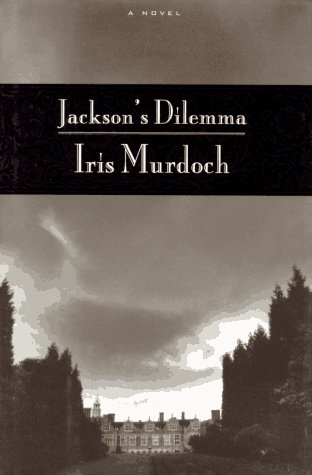 In a stately English mansion, friends and family are arriving for the wedding of the host's daughter, Marian. Out of the blue, Marian breaks off the engagement and disappears, throwing everything and everyone in disarray. So starts a tale which revolves round a mysterious and charismatic figure, in this case Jackson, a manservant who manipulates everything behind the scenes much more than anyone realizes. By the author of The Green Knight.

The Guardian
> Iris Murdoch's last novel, Jackson's Dilemma, was about a mysterious disappearance. But it tells another story, according to neuroscientists today. It subtly reveals the onset of Alzheimer's disease before the author herself could have known.... her vocabulary had dwindled and her language become simpler.... An analysis of 30 sentences found on average fewer words per sentence, and fewer clauses per sentence, in the last novel.

And so we reach the end of the Iris Murdoch A Month project with the much-dreaded Jackson's Dilemma. I remember reading this when it came out in paperback, only really then realising there was something very wrong. And I haven't read it since, where I have revisited old favourites.

Actually, it wasn't as bad as I feared. Although it was obviously weaker than the other novels, it was more Murdoch-Lite than a failure. The huge lapses in continuity (which could surely have been fixed by a kind person somewhere within the publishing process (and yes, I know she had refused to be edited since many books previously)) notwithstanding, Murdoch's themes and characters were there, and the story was Murdochian and engaging enough, if very short compared to the last few. Very upsetting at the end, though, where you can read Jackson's soliloquy as echoing Murdoch's own thoughts.

Goodby, Iris - and goodbye IM a month project, although both live on in our discussions of Jackson's Dilemma and my research project!… (more)
5 more
LibraryThing member sunderland
We meet the characters on the eve of a wedding. A note from the bride canceling plans leads to drama, worry, and lots of hand-wringing. The loose-knit set of friends seem to travel beween their London flats and their well-appointed country castles. All of the conflicts between characters are somehow magically mended by Jackson, a quiet man of indeterminate age and nationality. There are hints that he's not quite of-this-world. The reader doesn't have access to his thoughts nor how the problems are solved. Conversations between characters could be interchanged without difficulty since they they all seem to have the same voice. I finished the book even though it became more tedious and its flaws more obvious the longer I read. I don't recommend this book.… (more)
LibraryThing member SeriousGrace
I hate it when I read a review that influences my way of thinking, my way of reading a book. This happened innocently enough. I was looking for more information about Jackson's Dilemma. Was it ever made into a movie? Adapted for the stage? A musical? As a result of my searching I discovered Jackson's Dilemma was Murdock's last book. Not only that, but she was diagnosed with Alzheimer's right around the time of publication. Inadvertently, I read two reviews that seemed to blame the disease for the demise of Murdoch's craft. In other words, Jackson's Dilemma bombed. Because of the reviews I found myself wondering about the words. I will admit, the beginning was slow and the characters, curious, but in the end I didn't think it was all that bad.

It starts off on the eve of Edward and Marian's wedding. Edward is enjoying dinner with friends when he discovers a note under the door: an "I can't marry you" letter from Marian. There is no explanation but the following day there is much hoopla about making sure people are "barred" from the church and from attending a wedding that won't happen. All of Edward's friends are absurdly devastated by this turn of events, so much so that I started to really question their sanity. Meanwhile, both Edward and Marian disappear (separately, of course). Enter Jackson (Just Jackson, no last name). Even his arrival is peculiar.

In the end the plot becomes a garbled mess. Everyone is trying to be in love with someone else, exclaiming undying devotion left and right. Even Owen (male) and Tuan (also male) have some kind of odd, unexplained relationship going on. Despite all this, I did have two favorite lines: "The moon was not present, being elsewhere" (p 22). Who actually knows where the moon was, but I thought that was funny. The other line: "After all, as Randall said, it's the sea that matters" (p 100). Too bad Randall would lose his life to the very thing that mattered.… (more)
LibraryThing member lisahistory
Despite a surfeit of explanation marks and italics to show emotion, this book enchants in its depiction of wealthy people deciding what to do about life and love. You feel for the main character, Benet, because you see his thoughts, which are tormented despite the triviality of the topic (the relationships of others, friends and family).… (more)
LibraryThing member Bookish59
Murdoch's wide range of characters interact dramatically allowing Jackson's Dilemma to come alive with feelings of guilt, regret, desire, hope, frustration and especially love.

Why does Benet feel overly-responsible to those around him? Does he feel he is required to replace Uncle Tim? Tim intuitively understood, accepted and helped so many friends and acquaintances. Many of these people are polite to Benet but wish he didn't involve himself in their affairs. Fortunately, the mysterious Jackson is able to set things straight.… (more)
LibraryThing member thorold
Iris Murdoch's rather puzzling last novel. The plot is a bizarre parody of Victorian melodrama: the heroine is carried off by her Australian lover on the eve of the wedding, but everyone pairs off without the slightest trouble in the last act. The setting is oddly divorced from historical realities - various clues set us firmly in England in the second half of the 20th century, but two of the main characters are landowners who seem to have inherited their country houses without any irritating little worries about death duties and the like, and manage to support two or three houses, a few servants, and the odd Titian without any obvious source of revenue. We're clearly not meant to take it as a realistic novel: it's a fable of some kind, but it's hard to tell what. Certainly, most of the characters are on some sort of quest for spiritual redemption.

The eponymous Jackson is an enigma: other characters compare him to Kim and to Caliban, but he also seems to have significant parts of Jeeves and Figaro, and there's a suggestion that he's on a mission that is outside his own control - is the late Uncle Tim acting as Prospero from beyond the grave? Is Jackson some kind of angel? And where does the eledrly horse Spencer fit in? Sadly, we'll never know for sure. This is probably a book one reads more out of loyalty to a great writer than for its own sake, really.… (more)
Fewer