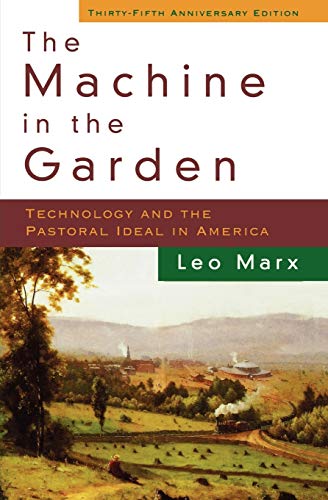 The machine in the garden : technology and the pastoral ideal in America

"For over four decades, Leo Marx's work has focused on the relationship between technology and culture in 19th- and 20th-century America. His research helped to define - and continues to enrich - the area of American studies concerned with the links between scientific and technological advances, and the way society and culture both determine these links. The Machine in the Garden fully examines the differences between the "pastoral" and "progressive" ideals that characterized early 19th-century American culture, and which ultimately evolved into the basis for many of the environmental and nuclear debates of contemporary society."--Jacket.

The Organic Machine: The Remaking of the Columbia River by Richard White
Crabgrass frontier : the suburbanization of the United States by Kenneth T. Jackson
Uncommon ground : toward reinventing nature by William Cronon