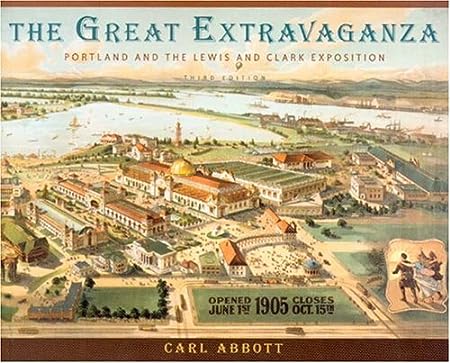 The great extravaganza : Portland and the Lewis and Clark Exposition

The Great Extravaganza details the Lewis and Clark Exposition of 1905 from its planning stage, through the heady days of the fair, and into the decade of growth and prosperity that followed. Abbott captures the progressive sentiments that motivated early twentieth-century developers and politicians and the part the Exposition played in the development of Portland. Now in its third edition since its original publication in 1981, The Great Extravaganza includes a new introduction by Carl Abbott along with historic photographs that give readers a tour of the extensive fairgrounds, the grand exhibit halls, and the dozens of attractions that drew a million and a half people to Portland during the summer and early fall of 1905.

Oregon Geographic Names by Lewis A. McArthur
Tracking down Oregon by Ralph Friedman
Panoramas of promise : Pacific Northwest cities and towns on nineteenth-century lithographs by John William Reps
Landscapes of promise : the Oregon story, 1800-1940 by William G. Robbins
Alaska-Yukon-Pacific Exposition : Washington's first world's fair : a timeline history by Alan J. Stein
10 more
Reading Portland: The City in Prose by John Trombold
Eden seekers : the settlement of Oregon, 1818-1862 by Malcolm Clark
That balance so rare : the story of Oregon by Terence O'Donnell
The Oregon desert by E. R. Jackman
Lewis & Clark : voyage of discovery by Stephen E. Ambrose
The Earth Shook, The Sky Burned: A Photographic Record of the 1906 San Francisco Earthquake and Fire by William Bronson
The conscience of a city; fifty years of City Club service in Portland, the City Club of Portland golden anniversary, 1916-1966 by Ellis Lucia
Oregon's Golden Years : Bonanza of the West by Miles F. Potter
The Collector : David Douglas and the Natural History of the Northwest by Jack Nisbet
River of the west : stories from the Columbia by Robert Clark
Fewer