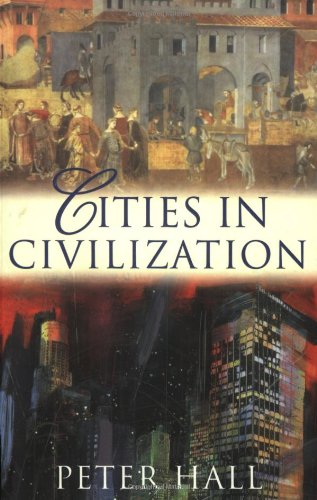 Ranging over 2,500 years,Cities in Civilizationis a tribute to the city as the birthplace of Western civilization. Drawing on the contributions of economists and geographers, of cultural, technological, and social historians, Sir Peter Hall examines twenty-one cities at their greatest moments. Hall describes the achievements of these golden ages and outlines the precise combinations of forces -- both universal and local -- that led to each city's belle epoque. Hall identifies four distinct expressions of civic innovation: artistic growth, technological progress, the marriage of culture and technology, and solutions to evolving problems. Descriptions of Periclean Athens, Renaissance Florence, Elizabethan London, and nineteenth-century Vienna bring to life those seedbeds of artistic and intellectual creativity. Explorations of Manchester during the Industrial Revolution, of Henry Ford's Detroit, and of Palo Alto at the dawn of the computer age highlight centers of technological advances. Tales of the creation of Los Angeles' movie industry and the birth of the blues and rock 'n' roll in Memphis depict the marriage of culture and technology. Finally, Hall celebrates cities that have been forced to solve problems created by their very size. With Imperial Rome came the apartment block and aqueduct; nineteenth-century London introduced policing, prisons, and sewers; twentieth-century New York developed the skyscraper; and Los Angeles became the first city without a center, a city ruled instead by the car. And in a fascinating conclusion, Hall speculates on urban creativity in the twenty-first century. This penetrating study reveals not only the lives of cities but also the lives of the people who built them and created the civilizations within them. A decade in the making,Cities in Civilizationis the definitive account of the culture of cities.… (more)

LibraryThing member DCArchitect
An assigned book for Architecture School, I read about half of it in bits and pieces.

Europe : a history by Norman Davies
City life : urban expectations in a new world by Witold Rybczynski
Cities & People: A Social and Architectural History by Mark Girouard
City of Quartz: Excavating the Future in Los Angeles by Mike Davis
Landscape and memory by Simon Schama
2 more
Borderland: Origins of the American Suburb, 1820-1939 by John R. Stilgoe
Citizens : a chronicle of the French Revolution by Simon Schama
Fewer