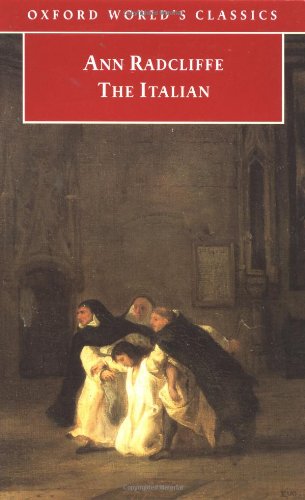 The Italian, or, The confessional of the Black Penitents : a romance

`His figure was striking, but not so from grace ... and as he stalked along, wrapt in the black garments of his order, there was something terrible in its air; something almost super-human.'First published in 1797, The Italian is one of the finest examples of Gothic romance. The fast-paced, narrative centres on Ann Radcliffe's most brilliant creation, the sinister monk Schedoni, whose past is shrouded in mystery.From the novel's opening chapters the reader is ushered into a shadowy world in which crime and religion are mingled. In the church of Santa Maria del Pianto in Naples, Ellena Rosalba and Vincentio di Vivaldi first meet; but their love is ill-omened. Leagued against them are the proud andambitious Marchese di Vivaldi and her confessor Father Schedoni. When Ellena vanishes on the death of her guardian, Vivaldi sets out in pursuit of her across the mountainous regions of southern Italy before himself falling prey to the Holy Inquisition.This revised and expanded edition explores the novel in the context of British attitudes to Italy and Roman Catholicism in the late eighteenth century with close attention to the novel's style and form.… (more)

LibraryThing member drrox
Published in 1797 this was the final novel from one of the early initiators of Gothic Romance - and many would say the genre's queen. The story begins as a Romeo and Juliet type affair: Vivaldi has fallen for Ellena, an enigmatic orphan, but his family strongly oppose the match. There is also a seemingly supernatural element as young suitor is repeatedly warned to keep his distance by the ghostly appearance of a sinister black monk. The plot moves fast, with lots of gorgeous descriptions of travel in the Alps and across Italy, and it takes in along the way many of the deliciously overwrought staples of the genre: poison, deathbed confessions, evil priests, sequestered monasteries and even the Inquisition. The main character is one Father Schedoni, the confessor of Vivaldi's mother, who, once drawn in to oppose the match using any means possible, finds his own shady past and web of deceit begins to unravel.

This is worth a read, particularly if you are interested in the early history of the Gothic novel. But, though The Italian is commonly hailed as Radcliffe's finest work, I have to say I found this a bit of a slog in places and overall much preferred her earlier book, the beautifully creepy Mysteries of Udolpho. Also, the e-book I read was one of the worst Kindle editions I've seen: absolutely riddled with typos, which - even for 77p - was a real shame.… (more)
6 more
LibraryThing member seanj
This book took forever to get through, but I liked it.
LibraryThing member keristars
I like Gothic novels all right, and I didn't mind The Mysteries of Udolpho any (I actually mostly enjoyed it), but wow was The Italian boring and frustrating. I wanted to like it, I truly did, but it's so very dry, and the passages upon passages of traveling through the sublime and/or picturesque scenery were a bit much to bear.

I feel that if you cut out most of the traveling scenes, and most of the scenes involving description of the setting, this book would be many times more enjoyable. It was pretty great once I got into it, but actually getting into the reading and not being easily distracted was difficult to do.

However, at the time of writing, it's been four or five years since I read it, so I don't remember it as clearly as I should, and I may simply be remembering the strongest of my post-reading impressions. At the very least, I never hated the book, and I've been unwilling to part with it, even as I've had to shrink my library several times.… (more)
LibraryThing member SqueakyChu
I found this book fun and easier going than some of the other gothic novels I've read. This book had characters which could easily be identified and a plot that was fairly easy to follow. I did miss a few plot points, but was set straight by my tutor immediately - so no harm done. My only issue with this novel was that it was very verbose so that the story often got lost in all of the words. However, that was only a minor issue. The story moved along well, and the scenery seemed so magnificent that I wished I could have jumped into this novel to travel along with the characters (well, maybe not into the Inquisitor's prison!).… (more)
LibraryThing member LGandT
I wanted to like this book, it wasn't bad just so boring. The imagery was excellent, loved that part, but the plot it just took so long to move along. Ended up abandoning it.

I can see how later works reflect this, but it just wasn't for me. I found my mind wandering to other novels.
LibraryThing member sianpr
A gothic novel complete with twists and turns and plenty of malign characters to frustrate the hero and heroine. Great Xmas read.
LibraryThing member PhilSyphe
Rather a long haul, this one, and not really worth the effort.

Scenes here and there are engaging, but overall this lengthy tome is slow-paced and lacklustre.
Fewer