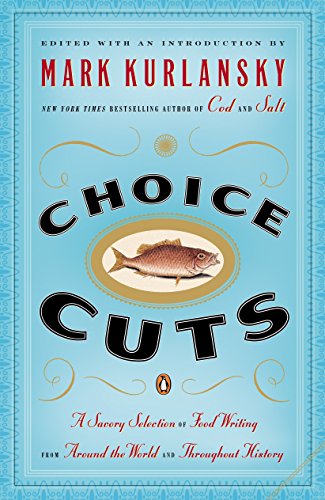 Choice cuts : a savory selection of food writing from around the world and throughout history

“Every once in awhile a writer of particular skills takes a fresh, seemingly improbable idea and turns out a book of pure delight.” That’s how David McCullough described Mark Kurlansky’sCod: A Biography of the Fish That Changed the World, a work that revealed how a meal can be as important as it is edible.Salt: A World History, its successor, did the same for a seasoning, and confirmed Kurlansky as one of our most erudite and entertaining food authors. Now, the winner of the James Beard Award for Excellence in Food Writing shares a varied selection of “choice cuts” by others, as he leads us on a mouthwatering culinary tour around the world and through history and culture from the fifth century B.C. to the present day. Choice Cutsfeatures more than two hundred pieces, from Cato to Cab Calloway. Here are essays by Plato on the art of cooking . . . Pablo Neruda on french fries . . . Alice B. Toklas on killing a carp . . . M. F. K. Fisher on the virility of Turkish desserts . . . Alexandre Dumas on coffee . . . W. H. Auden on Icelandic food . . . Elizabeth David on the downward march of English pizza . . . Claude Lévi-Strauss on “the idea of rotten” . . . James Beard on scrambled eggs . . . Balzac, Virginia Woolf, E. M. Forster, Chekhov, and many other famous gourmands and gourmets, accomplished cooks, or just plain ravenous writers on the passions of cuisine.… (more)

LibraryThing member vsmoothe
"Around the world" is really stretching it. The writing here is almost entirely from America and Western Europe. It's just all the usual suspects, things I'd read time and time again. I mean, I Brillat-Savarin and MFK Fisher too, but they make for fairly dull inclusions in an anthology that I had hoped would expose me to new writing. Many of the excerpts are also way too short to get any meaningful sense of style or emotion from them anyway. Definitely worth skipping, unless you have never read any food writing and are looking for an introduction.… (more)
1 more
LibraryThing member SeriousGrace
Everything about this book is based on one simple subject - food. Kurlansky takes that subject and explores everything having to do with it. From growing, hunting, buying, and preparing to smelling, eating, and savoring it. The art of cooking, the downfall of rotting, from killing to cultivating. From Cato to Chekhov, Kurlansky finds quotes, essays and passages from a multitude of well known individuals, some with lives centered around food like M.F.K. Fisher and Elizabeth David and some not like Virginia Woolf, Ernest Hemingway and E.M Forster. Whether focused on an ingredient like garlic or chocolate, or a technique like faking venison or baking bread, or a location like favorite restaurants or markets, Kurlansky covers it all. It's historical and cutting edge. Technical and funny. Poetry and dissertation. Well worth the read.… (more)
Fewer

The last days of haute cuisine by Patric Kuh
The man who ate everything : and other gastronomic feats, disputes, and pleasurable pursuits by Jeffrey Steingarten
The art of eating by M. F. K. Fisher
An omelette and a glass of wine by Elizabeth David
Feeding a Yen: Savoring Local Specialties, from Kansas City to Cuzco by Calvin Trillin