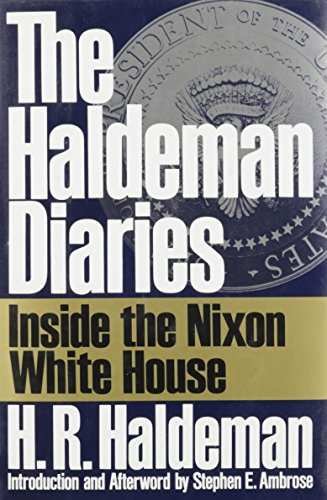 The Haldeman diaries : inside the Nixon White House

""It is probable H. R. Haldeman never told all he knew about Nixon's role, the Watergate cover-up, or the Administration's abusive tactics against its political enemies," wrote Newsweek upon Haldeman's death on November 12, 1993. "He takes [those] secrets - and whatever else he knew - to final judgment."" "But not all he knew, nor all the secrets. When Haldeman died, he left behind a profound legacy that few knew existed - four years, three months of diaries, which he wrote and dictated every day that he was Chief of Staff for President Richard Nixon. These diaries, never before published, offer a fascinating portrait of an era and a White House that still haunt American history and politics to this day." "With keen observations and complete frankness, this record, written for Haldeman alone, reflects an unvarnished view of the triumphs and tragedy of those years. Here is a riveting portrait of that period's more celebrated events - the Cambodia bombings, the Kent State killings, the ground-breaking Russia and China trips, the 1972 election campaign, the Vietnam peace negotiations, the power struggles of the White House staff, the manipulations and headaches caused by Henry Kissinger, the beginning of the fall of Spiro Agnew, and, especially, the Watergate scandal - written exactly as they happened and reported in astonishing detail. More important, here is a fresh view of Richard Nixon, by the man who knew him best." "Nixon, who was the biggest star of his own drama, is revealed more intimately than we have ever seen him - shrewd, complex, petty, obsessive, sensitive, manipulative, and self-absorbed." "Here we learn of Nixon's double-cross of Senator Howard Baker and his chance for a Supreme Court seat; Nixon's plan to photograph Ted Kennedy in compromising positions, then leak the photos to the press; Nixon's attempts to get John Connally to replace Agnew on the 1972 ticket; how Nixon attempted to get LBJ to fix the Senate Watergate investigation; and how Nixon's inner circle hunted for a fall guy as the Watergate drama unfolded, and who some of the surprising candidates were...." "The Haldeman Diaries is perhaps the most meticulously reported and eye-opening chronicle we will ever have of those years, a definitive insider's account so illuminating and candid that we will never look at the Nixon White House in the same way again."--BOOK JACKET.Title Summary field provided by Blackwell North America, Inc. All Rights Reserved… (more)

Nixon and Kissinger : partners in power by Robert Dallek
Abuse of power : the new Nixon tapes by Stanley I. Kutler
The arrogance of power : the secret world of Richard Nixon by Anthony Summers
Taking charge : the Johnson White House tapes, 1963-1964 by Michael R. Beschloss
Shadow : five presidents and the legacy of Watergate by Bob Woodward
4 more
Richard Milhous Nixon : the rise of an American politician by Roger Morris
Kennedy & Nixon : the rivalry that shaped postwar America by Christopher Matthews
The secret man : the story of Watergate's Deep Throat by Bob Woodward
In retrospect : the tragedy and lessons of Vietnam by Robert S. McNamara
Fewer