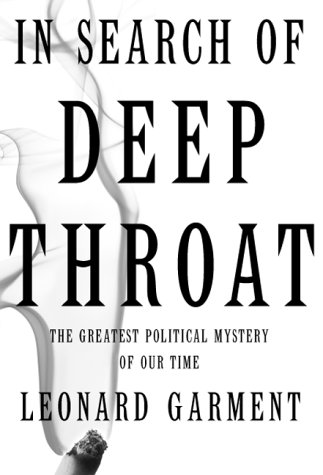 In search of Deep Throat : the greatest political mystery of our time

More than a quarter century after Bob Woodward introduced his Scotch-drinking, cigarette-smoking, garage-skulking friend and source in All the President's Men , the public remains enduringly engrossed by the mystery of Deep Throat's identity. Leonard Garment became fascinated himself and began his own search for Deep Throat. This is the story of that hunt and its successful outcome, a hunt conducted in quintessential Washington fashion: at lunches, dinners, and parties, through the examination of secret, classified documents and testimony, and assisted by liberal doses of political gossip and insider tips from Woodward himself.

The Haldeman diaries : inside the Nixon White House by H. R. Haldeman
Abuse of power : the new Nixon tapes by Stanley I. Kutler
The arrogance of power : the secret world of Richard Nixon by Anthony Summers
The secret man : the story of Watergate's Deep Throat by Bob Woodward
Kennedy & Nixon : the rivalry that shaped postwar America by Christopher Matthews
4 more
Richard Milhous Nixon : the rise of an American politician by Roger Morris
Shadow : five presidents and the legacy of Watergate by Bob Woodward
Richard Nixon: The Life by John A. Farrell
Nixon and Kissinger : partners in power by Robert Dallek
Fewer