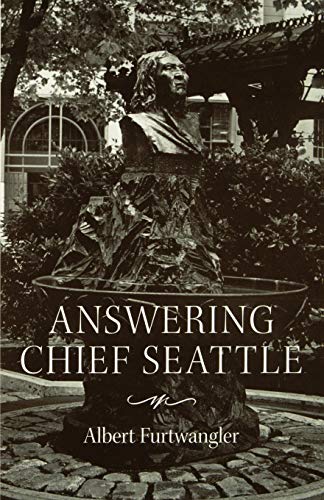 Over the years, Chief Seattle's famous speech has been embellished, popularized, and carved into many a monument, but its origins have remained inadequately explained. Understood as a symbolic encounter between indigenous America, represented by Chief Seattle, and industrialized or imperialist America, represented by Isaac I. Stevens, the first governor of Washington Territory, it was first published in a Seattle newspaper in 1887 by a pioneer who claimed he had heard Seattle (or Sealth) deliver it in the 1850s. No other record of the speech has been found, and Isaac Stevens's writings do not mention it. Yet it has long been taken seriously as evidence of a voice crying out of the wilderness of the American past. Answering Chief Seattle presents the full and accurate text of the 1887 version and traces the distortions of later versions in order to explain the many layers of its mystery. This book also asks how the speech could be heard and answered, by reviewing its many contexts. Mid-century ideas about land, newcomers, ancestors, and future generations informed the ways Stevens and his contemporaries understood Chief Seattle and recreated him as a legenday figure.… (more)

Native Seattle : histories from the crossing-over place by Coll-Peter Thrush
Indians of the Pacific Northwest by Ruth Underhill
Seattle now & then by Paul Dorpat
The Seattle totem pole by Viola Edmundson Garfield
Seattle, past to present by Roger Sale
27 more
American Indian Autobiography by H. David Brumble
Seattle Now & Then: Volume 2 by Paul Dorpat
Pioneer Square : Seattle's oldest neighborhood by Mildred Tanner Andrews
294 glimpses of historic Seattle, its neighborhoods and neighborhood businesses by Paul Dorpat
Puget's Sound : a narrative of early Tacoma and the southern Sound by Murray Cromwell Morgan
Once upon a time in Seattle by Emmett Watson
Alaska-Yukon-Pacific Exposition : Washington's first world's fair : a timeline history by Alan J. Stein
The totem pole : an intercultural history by Aldona Jonaitis
Washington Territory by Robert E. Ficken
In defense of our neighbors : the Walt and Milly Woodward story by Mary Woodward
Skid road : an informal portrait of Seattle by Murray Cromwell Morgan
Utopias on Puget Sound : 1885-1915 by Charles Pierce LeWarne
Rites of passage : a memoir of the sixties in Seattle by Walt Crowley
Impressions of imagination : terra-cotta Seattle by Robert Venturi
A history of the state of Washington by Lancaster Pollard
Olympic battleground : the power politics of timber preservation by Carsten Lien
Family of strangers : building a Jewish community in Washington State by Molly Cone
Tacoma by Macgougan Denny
Inuksuit : silent messengers of the Arctic by Norman Hallendy
The last wilderness by Murray Cromwell Morgan
S'abadeb = The gifts : Pacific Coast Salish arts and artists by Barbara Brotherton
The sights of Seattle, downtown : a photographic tour by Bob Peterson
Seattle: Then & Now by James Madison Collins
The Canoe and the Saddle; or, Klalam and Klickatat by Theodore Winthrop
In praise of island stewards: Portraits and views in passing by Joel Sackett
Revolution in Seattle: A memoir by Harvey O'Connor
Union Bay, the life of a city marsh by Harry Wentworth Higman
Fewer