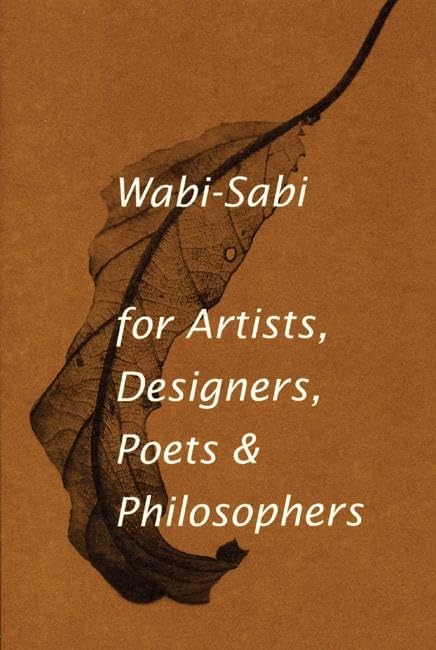 From the Introduction Wabi-sabi is a beauty of things imperfect, impermanent, and incomplete. It is a beauty of things modest and humble. It is a beauty of things unconventional. The immediate catalyst for this book was a widely publicized tea event in Japan. The Japanese aesthetic of wabi-sabi has long been associated with the tea ceremony, and this event promised to be a profound wabi-sabi experience. Hiroshi Teshigahara, the hereditary iemoto (grand master) of the Sogetsu school of flower arranging, had commissioned three of Japan's most famous and fashionable architects to design and build their conceptions of ceremonial tea-drinking environments. Teshigahara in addition would provide a fourth design. After a three-plus-hour train and bus ride from my office in Tokyo, I arrived at the event site, the grounds of an old imperial summer residence. To my dismay I found a celebration of gorgeousness, grandeur, and elegant play, but hardly a trace of wabi-sabi. One slick tea hut, ostensibly made of paper, looked and smelled like a big white plastic umbrella. Adjacent was a structure made of glass, steel, and wood that had all the intimacy of a highrise office building. The one tea house that approached the wabi-sabi qualities I had anticipated, upon closer inspection, was fussed up with gratuitous post- modern appendages. It suddenly dawned on me that wabi-sabi, once the preeminent high-culture Japanese aesthetic and the acknowledged centerpiece of tea, was becoming-had become?-an endangered species. Admittedly, the beauty of wabi-sabi is not to everyone's liking. But I believe it is in everyone's interest to prevent wabi-sabi from disappearing altogether. Diversity of the cultural ecology is a desirable state of affairs, especially in opposition to the accelerating trend toward the uniform digitalization of all sensory experience, wherein an electronic "reader" stands between experience and observation, and all manifestation is encoded identically. In Japan, however, unlike Europe and to a lesser extent America, precious little material culture has been saved. So in Japan, saving a universe of beauty from extinction means, at this late date, not merely preserving particul… (more)

LibraryThing member SaraPrindiville
Interesting topic I had never heard of previously, however, it seems to describe some of my personal philosophy. It is appropriate that I read it directly after Thoreau who also writes of the beauty of simplicity and natural objects.
4 more
LibraryThing member chriszodrow
One to read again and again.
LibraryThing member misericordia
A very thin book that explains the concept of Wabi-Sabi. This is a great book to give you a new perspective. Maybe you don't want to internalize the concepts here, but you should try to use them as a method of seeing the world in a new light. If you don't like that view go back to your old view. However, Wabi-Sabi seems to me, like and more substainable view and aesthetic.… (more)
LibraryThing member Muscogulus
This pleasant book is an essay on a Japanese aesthetic concept, wabi-sabi, and its associated ethical precepts. The accompanying photos also try to convey the essence of the indefinable wabi-sabi.
LibraryThing member RajivC
I started the book, read a chapter and put it away for the night. Then, last night I read another chapter, and woke up in the middle of the night to read some more.
Finally, I woke up early morning to finish it

While I read it fast, it is a delightfully captivating work. It is one that speaks to the soul, and is one that is very relevant to todays times. When we are all chasing shiny 'perfection', a little bit of dirt, imperfection, nature allows us to feel the spirit of nature and of art.

Timely indeed. Leaves much room for thought and reflection.

And, it is pithy. You cannot gabble on about such concepts. They are truly to be internalised.… (more)
Fewer

In praise of shadows by Jun'ichiro Tanizaki
Zen and Japanese Culture by Daisetz Teitaro Suzuki
How to Wrap 5 Eggs: Japanese Design in Traditional Packaging by Hideyuki Oka
Art & Fear: Observations on the Perils (and rewards) of Artmaking by David Bayles
The creative habit : learn it and use it for life : a practical guide by Twyla Tharp
2 more
Zen mind, beginner's mind by Shunryū Suzuki
Zen Flesh, Zen Bones by Paul Reps
Fewer