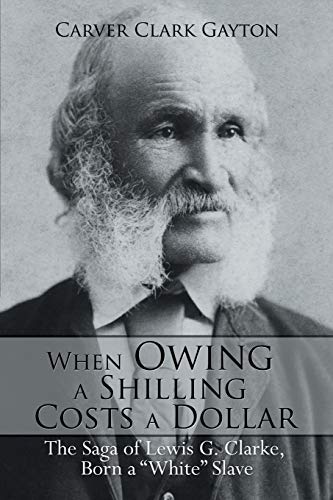 When owing a shilling costs a dollar: The saga of Lewis G. Clarke, born a "white" slave

Lewis G. Clarke, born into slavery, was separated from his Scottish father and quadroon mother at the age of six in Madison County, Kentucky. the atrocities he suffered and witnessed under his new masters were abominable and way beyond what most slaves endured during slavery. After escaping from bondage, Clarke then traveled to Cambridge, Massachusetts, and became a primary spokesman for the abolitionist movement throughout the Northeast and Canada during the 1840s and 1850s. While in Cambridge, he lived in the home of Aaron and Mary Safford where he met many times with Harriet Beecher Stowe, Mary's stepsister, as well as many other luminaries of the abolitionist movement. the rebellious quadroon slave George Harris of Mrs. Stowe's book Uncle Tom's Cabin was identified by her as based significantly upon the life of Clarke. When the Civil War ended, Clarke continued to be in demand as a speaker, nationally, on behalf of former slaves. Clarke's notoriety and influence was such that when he died in Lexington, Kentucky, that his passing was noted in newspapers throughout the world with full-page eulogies. If there was a common thread in Lewis's life, it related to striving to have the kind of family life that he never experienced as a child; however, during his lifetime, the vicissitudes of race and color lines in America made his vision not only challenging but ephemeral.… (more)

Inscribed to Virginia by the author