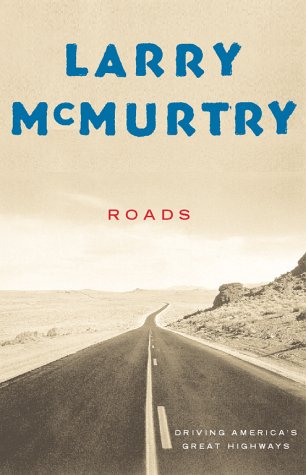 As he crisscrosses America -- driving in search of the present, the past, and himself -- Larry McMurtry shares his fascination with this nation's great trails and the culture that has developed around them. Ever since he was a boy growing up in Texas only a mile from Highway 281, Larry McMurtry has felt the pull of the road. His town was thoroughly landlocked, making the highway his "river, its hidden reaches a mystery and an enticement. I began my life beside it and I want to drift down the entire length of it before I end this book." In Roads, McMurtry embarks on a cross-country trip where his route is also his destination. As he drives, McMurtry reminisces about the places he's seen, the people he's met, and the books he's read, including more than 3,000 books about travel. He explains why watching episodes of "The Mary Tyler Moore Show" might be the best way to find joie de vivre in Minnesota; the scenic differences between Route 35 and I-801; which vigilantes lived in Montana and which hailed from Idaho; and the history of Lewis and Clark, Sitting Bull, and Custer that still haunts Route 2 today. As it makes its way from South Florida to North Dakota, from eastern Long Island to Oregon, "Roads" is travel writing at its best.… (more)

LibraryThing member anterastilis
This isn't the kind of travelogue I'm used to reading. I've read a lot of William Least Heat-Moon and Bill Bryson - both of them concentrate on the interesting places and people that they meet on their journeys. I don't think McMurtry speaks more than six times in this book. He's an old Cowboy, that's for sure. He digs silence and I think he comments at some point that Steinbeck's "Travels with Charley" would have been better if he'd left the damn dog at home.

McMurry is probably one of the last living people who has gone on an American cattle drive. His first was at the age of four. Cattle went from being driven on the range to driven on highways, and so did McMurtry. The majority of this book is his ruminations and memories of places he's been and people he's met, things he's done and things he's seen. Sounds slow and boring, right?

Nope! It was a good quick read, but entirely engaging. What i enjoyed best about it (and I don't know how McMurtry would feel about this) is when he muses about different travel writers. He talks about books that he's read and other writers he's met - I started out keeping a mental list and eventually started keeping a written list on the inside of the back cover. Roads is an incredible Reader's Advisory tool for travel books - even the ones he doesn't personally like! His complaining about William Least Heat-Moon is what made me go and pick up Blue Highways, one of my all time favorite books.… (more)
7 more
LibraryThing member michaelm42071
It’s an odd book in which McMurtry makes the case for Interstate driving. I call it odd because McMurtry’s method seems to be to think about or describe places as he drives by them. The book is full of sentences like “I also passed up a chance to revisit -----.” “I wanted to drive the American roads at the century’s end, to look at the country again, from border to border and beach to beach,” McMurtry writes, and so he does, often driving 700 miles a day across the country on Interstates 10, 40, 70, 80, or 90 or down its length on 5, 25, 35, or 75. Not interested in poking into strange places, he drives “the great roads” as he calls them, “whose aim is to move you, not educate you.” He shares my prejudices for warmth and open spaces, preferring the south to the north and the west to the east, refusing to drive on I-95. McMurtry is old enough to appreciate the difference the Interstate roads made in enabling us to get around this huge country quickly. Getting there is the point of the road, McMurtry suggests. Though they have adventures along the way and travel before Interstates, Sal Paradise and Dean Moriarty also have this attitude about roads. They are always looking for the “final” cities, the end of everything at the end of the road: New York, Los Angeles, San Francisco, and finally Mexico City. Unlike McMurtry, they hardly even talk about what they pass by, so hurried are they to get to the end.… (more)
LibraryThing member russelllindsey
I picked this book up at a library sale, and it introduced me to author Larry McMurtry. It is a great read and opened up a whole new series of books for me.
LibraryThing member TimBazzett
Larry McMurtry's ROADS (2000) was only mildly entertaining to me. I started reading his books forty years ago, and read his first seven novels, then a few years later, I read LONESOME DOVE, which was something of a struggle to get through. So I laid off his books for several years. Last year I read his memoir, BOOKS, which I enjoyed tremendously, although many hated it. In that book, McMurtry made the rather startling admission that he didn't much enjoy writing anymore; that his antiquarian book business was a lot more interesting to him. In ROADS that idea comes through implicitly again, and he also makes a few revealing comments about how his open heart surgery back in the 90s left him reeling, noting that he lost his 'personality' after that frightening operation. Not only could he not write for a while, he didn't even read for a year or two. These honest comments alone make ROADS worth the read, I think.

But McMurtry has obviously regained his love of books and reading and the literary allusions in this book had me making notes again, as he mentioned many writers who came from the various states he drove through here. Many of them I already knew, but even so, those allusions were the spice the narrative needed. His mention of Teddy 'Blue' Abbot's WE POINTED THEM NORTH prompted me to go take another look at my own copy of that book. I've had it for a few years now, but have yet to read it. Soon. I was surprised when he spoke of Michigan writers that he only mentioned Hemingway and an obscure writer named Janet Lewis. I looked up her books, but they didn't look like my kind of stuff. Jim Harrison only rated a footnote. McMurtry admitted he didn't read any Harrison until after this book was finished, quite a surprising gap from someone who reads so widely and voluminously.

The first McMurtry book I read was THE LAST PICTURE SHOW. It remains one of my favorites from this prolific author.

McMurtry does not really come across as much of a "people person." He may in fact be more comfortable with books than he is with interpersonal dealings, and ROADS serves to emphasize this. He is more interested in covering ground than he is in meeting people as he passes through multiple states. He says early on: "I doubt that I will be having folksy talks with people I meet as I travel." And he does not. Which is okay. McMurtry is, after all, a 'book-ish' type, perhaps even a bit shy. I can relate. In fact I may try those other so called 'memoirs' he's written, one about the literary life, and another about his life in films as a screenwriter. I can stand a little name-dropping.… (more)
LibraryThing member thornton37814
I enjoy traveling. McMurtry's non-fiction travel book turned out to be a disappointment for me. He doesn't attempt to cover every highway or state in his travels, but instead of getting out on the interesting roads, he sticks to the Interstate Highway System for the most part. Then on top of that, he just drives -- sometimes 800 miles or so in a single day. He doesn't take time to savor the experience. About the only stop he made was at Hemingway's house in Key West. During the rest of the book, he sometimes reminisces about another time he was in the area and visited something. The book just kind of fell flat. He did drive through my area, but besides commenting on how awful the road construction was, he only made some remarks about James Agee as he drove through Knoxville. I doubt I'll try to read anything else by McMurtry. I'm not into westerns, and his non-fiction doesn't make the grade either.… (more)
LibraryThing member deldevries
Kind of disappointed in this. The author is pretty clear in the forward as to his purpose and intentions. I like the travel genre and I was interested in US Highway 281. But this book never gets enough traction to keep my interest.
LibraryThing member jennannej
When I began, I really didn't like this book. The author wasn't TALKING about anything at all. Just rambling on about weather and highway conditions and then he started promoting all of the books he had written. And in this book I wrote about...And in that book... Also, he never stopped. He only drove the interstates. How can you know anything about a place without stopping and spending some time? Zipping by at 80 MPH hardly makes you an expert.

Somehow though, after I had passed the midway point of the book, I warmed up to it a bit more. I don't know if he actually started to write something worth reading or if I had simply gotten used to his writing style, but every once in a while I would think, "good point," or "I didn't know that."

And in the very last pages of the book, his journeys brought him somewhat close to my stomping ground and one paragraph made me want to start road tripping as soon as possible:

"Throughout the afternoon and the next morning the realization slowly grew on me that I had accidentally found something I hadn't really expected to find: the dream road, the good-as-it-gets road, the ideal path into the heart of the great steppe. U.S.2 had everything-- the widest vistas, the greatest skies, and more history than any one traveler could possibly hope to exhaust: Lewis and Clark, the Missouri, the mountain men, the Cheyenne, the Sioux, Sitting Bull, the Yellowstone, Teddy Blue."… (more)
LibraryThing member BookConcierge
I’ll say this for McMurtry, when he puts his mind to it he can paint a landscape as well as any author, and weave a story that will keep you riveted. I wish he’d done more of this in this memoir of a year spent traveling America’s major highways. The book is like many major interstates … miles (pages) of mind-numbing sameness, occasionally interrupted by a point of interest. There are a few memorable passages – his father’s encounter with a rattler, the disappointment of what Key West has become, and the attack of the Volkswagen-Beetle-sized tumbleweeds – but mostly I was in danger of falling asleep at the wheel (bookmark). I also was puzzled by his references to “the 10” or “the 281” rather than the more usual “I-10” or “Hwy 281.” I have never heard the roads referred to as McMurtry does, and it made me feel disoriented.… (more)
Fewer