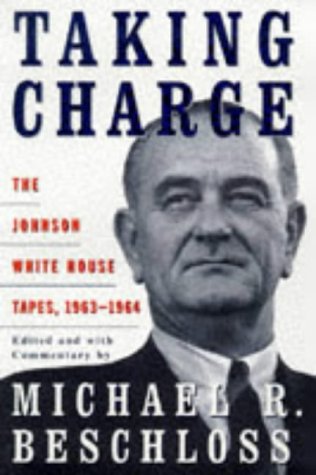 TAKING CHARGE brings you into the room with a political legend, still hated and revered a quarter of a century after his death. The only President to record his private conversations from his first day in office, Lyndon Johnson ordered the tapes to be locked in a vault until at least the year 2023. But now they have been unsealed, providing a close up look at a President taking power such as we have never had before - from John F. Kennedy's murder in November 1963 to Johnson's campaign for a landslide victory. Michael Beschloss has transcribed and annotated the secretly recorded tapes, providing historical commentary that allows readers to understand fully the people, crisis, and controversies that appear on them. TAKING CHARGE offers spellbinding insight into how Johnson used power by flattering, provoking and twisting the arms of some of the dominant personalities of our times, including Robert Kennedy and Martin Luther King, Jr. We come to understand Johnson's complex, changing relationships with Lady Bird and the rest of his family, Jacqueline Kennedy, ex-Presidents Truman and Eisenhower and members of his Cabinet and White House Staff.… (more)

LibraryThing member ck2935
I actually have the hardcover edition of this book. Another insightful book for an inside scoop on the Lyndon Johnson White House. He was a true deal maker and an arm wrangler. It is amazing what he accomplished in the area of civil rights and education, but unfortunately is stained by his failed Vietnam policy.

Reaching for Glory: Lyndon Johnson's Secret White House Tapes, 1964-1965 by Michael R. Beschloss
Abuse of power : the new Nixon tapes by Stanley I. Kutler
Lone star rising : Lyndon Johnson and his times, 1908-1960 by Robert Dallek
Flawed giant : Lyndon Johnson and his times, 1961-1973 by Robert Dallek
The Haldeman diaries : inside the Nixon White House by H. R. Haldeman
9 more
Kennedy & Nixon : the rivalry that shaped postwar America by Christopher Matthews
Means of ascent by Robert A. Caro
The years of Lyndon Johnson. [Volume 3], Master of the senate by Robert A. Caro
Lyndon Johnson and the American Dream by Doris Kearns Goodwin
Nixon and Kissinger : partners in power by Robert Dallek
President Kennedy profile of power by Richard Reeves
Shadow : five presidents and the legacy of Watergate by Bob Woodward
The arrogance of power : the secret world of Richard Nixon by Anthony Summers
The Conquerors: Roosevelt, Truman and the Destruction of Hitler's Germany, 1941-1945 by Michael R. Beschloss
Fewer