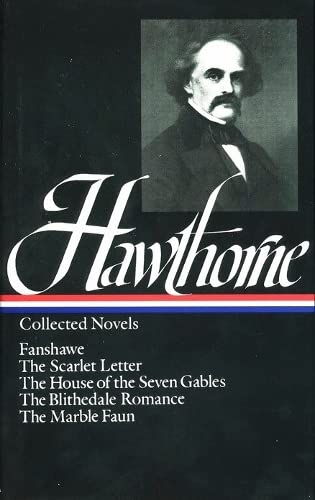 New York : Literary Classics of the United States : Distributed to the trade by the Viking Press, c1983.

Here in one volume are all five of Nathaniel Hawthorne's world-famous novels. "The House of the Seven Gables" moves across 150 years from an ancestral crime condoned by the Puritan theocracy to a new beginning in the bustling and democratic Jacksonian era. Hawthorne's masterpiece, "The Scarlet Letter," is a dramatic allegory of the social consequences of adultery and the subversive force of personal desire in a community of laws. "The Blithedale Romance" explores the perils, which Hawthorne knew at first hand, of living in a utopian community, and the inextricability of political, personal, and sexual desires. "Fanshawe" is an engrossing apprentice work which Hawthorne published anonymously and later sought to suppress. "The Marble Faun," his last finished novel, involves mystery, murder, and romance among American artists in Rome.… (more)

LibraryThing member lucybrown
classic literature and one of my favorites. Of the novels, I have not read Fanshawe and it has been a very long time since I have read The House of Seven Gables. Long time as in I was about Lucy of Seven Years. Maybe 9.
2 more
LibraryThing member Lapsus16
Too bad kids are forced to read this is school when they don't have patience and time to appreciate this incredible set of fiction pieces. The plots are so credible that often the reader turns into one of the protagonists!
LibraryThing member BobNolin
Boy was this a stinker. Got half way through and quit. It's not a novel, but perhaps it should have been a play. There's little setting, little description, nothing vivid about it. Half way through and still no idea how these people decided to get together to change the world (by farming and competing with the other farmers in the local market -- yeah, that'll make the world a better place). I really would like to know why this poor writer is thought so highly of. (Sorry, ended in a preposition. Shoot me.) Why do they keep making kids read The Scarlet Letter? Give 'em some Flannery O'Connor! That'll wake 'em up.… (more)
Fewer