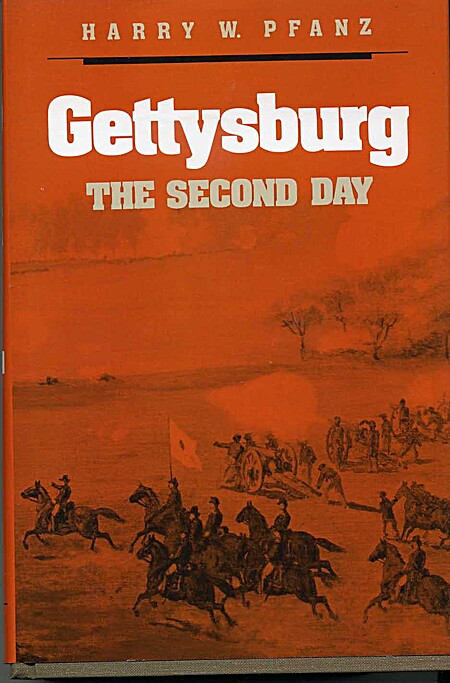 The second day's fighting at Gettysburg--the assault of the Army of Northern Virginia against the Army of the Potomac on 2 July 1863--was probably the critical engagement of that decisive battle and, therefore, among the most significant actions of the Civil War. Harry Pfanz, a former historian at Gettysburg National Military Park, has written a definitive account of the second day's brutal combat. He begins by introducing the men and units that were to do battle, analyzing the strategic intentions of Lee and Meade as commanders of the opposing armies, and describing the concentration of forces in the area around Gettysburg. He then examines the development of tactical plans and the deployment of troops for the approaching battle. But the emphasis is on the fighting itself. Pfanz provides a thorough account of the Confederates' smashing assaults -- at Devil's Den and Litle Round Top, through the Wheatfield and the Peach Orchard, and against the Union center at Cemetery Ridge. He also details the Union defense that eventually succeeded in beating back these assaults, depriving Lee's gallant army of victory. Pfanz analyzes decisions and events that have sparked debate for more than a century. In particular he discusses factors underlying the Meade-Sickles controversy and the questions about Longstreet's delay in attacking the Union left. The narrative is also enhanced by thirteen superb maps, more than eighty illustrations, brief portraits of the leading commanders, and observations on artillery, weapons, and tactics that will be of help even to knowledgeable readers. Gettysburg--The Second Day is certain to become a Civil War classic. What makes the work so authoritative is Pfanz' mastery of the Gettysburg literature and his unparalleled knowledge of the ground on which the fighting occurred. His sources include the Official Records, regimental histories and personal reminiscences from soldiers North and South, personal papers and diaries, newspaper files, and last -- but assuredly not least -- the Gettysburg battlefield. Pfanz's career in the National Park Service included a ten-year assignment as a park historian at Gettysburg. Without doubt, he knows the terrain of the battle as well as he knows the battle itself.… (more)

The second day of the Battle of Gettysburg was a series of engagements that, while connected, still wound up being more or less separate mini-battles, so that we can talk about the action at Devil’s Den, the fight for the Peach Orchard, and so on. Pfanz, in his detailed study of the battle, has written two books; one covering the southern half of that day’s battle from the Union center at Cemetery Ridge to the Round Tops and the other the northern half involving Culp’s Hill and Cemetery Hill. This book is concerned with the southern half.

Pfanz starts off this book as he does the other two with a recapitulation of the beginning of the campaign, from June 3, when Lee started pulling out his armies from Fredericksburg and sending them up into Maryland and Pennsylvania. In each book, he's done it from a different perspective; in this one, he starts out with Stanton’s order relieving Hooker of command of the Army of the Potomac, replacing him with Meade. The first chapter very briefly describes the march of both armies. The second then gives a succinct summary of the first day’s fighting from the Confederate point of view. It finishes with a discussion of the arguments made for and against the attack on July 2. The third does the same for the Union army’s concentration at Gettysburg and the reaction of Meade and his generals to the Union defeat that sent the troops racing back to Cemetery Ridge and Hill.

It’s with the 3rd chapter that Pfanz starts his account of the battle on July 2nd. For the next 100 pages, Pfanz goes into excruciating detail about the movements of the troops, including the critical shift by Sickles of the Union 3rd Corps to an advanced line incorporating Devils’ Den, the Wheatfield and the Peach Orchard, and Longstreet’s equally critical decision to countermarch his corps in order to keep out of sight of the Union Signal company stationed on Little Round Top. As more of Meade’s army reached Gettysburg, he and his Corps commanders were busy shifting units around, especially after Sickles’ disastrous decision to ignore Meade’s orders and create the salient in front of Cemetery Ridge. Pfanz goes into excruciating detail--with not one single map! It was infuriating to read without that assistance; I wound up using, as I did with his first book on the July 1 battle, Maps of Gettysburg by Gottlieb. While the two authors take somewhat different approaches to the battle and therefore those maps were not completely adequate, still they served to give me a good idea of all the troop movements in the morning and early afternoon of July . Without them, all that painstaking detail would have been lost on me, since I have no other resource.

But starting with the chapter on the actual opening of the battle, there are very fine maps to go along with a riveting description of the action. And riveting it is. Longstreet struck with all the power of which he was justly famous at a Union line that was badly extended and inadequately defended on Sickles’ flanks and also at a Union army that was not yet fully assembled. One of the reason for the horrendous casualties on the Union side was that units were thrown in piecemeal, as they became available, to plug gaps in the line. That sort of tactic is usually disastrous; in the case of Gettysburg, while it added to the Union casualties, it was all the defense that Meade and his corps commanders had. And in the end, it was enough; the day was a Union victory with the end of the fighting seeing the Federals concentrated, finally, and in a stronger position than they were at the beginning of the fighting; with no portion of the critical Cemetery Ridge/Round Top line having been lost, thanks to heroic defenses. The Confederates, on the other hand, had gained little.

As a sidelight, it’s interesting to compare Pfanz’s account with that of E. Porter Alexander, Longstreet’s Chief of Artillery at Gettysburg, who wrote extensively about Gettysburg. In his memoirs, Fighting for the Confederacy, Alexander makes that second day’s fighting as a victory for the Confederacy, sneering at the performance of Union soldiers and units and lauding the Confederates as practically supermen. While it is most certainly true that the Confederates fought like demons, the fact is that the Union soldiers did extremely well under adverse conditions, trying to hold lines (Sickles’ ghastly error) that were basically indefensible. 9,000 Union casualties as compared to 6,000 Confederate ones do not describe an army of cowards.

Pfanz’s research is painstaking and he knows the battlefield well, since, in his career as a historian for the National Park Service, he spent 10 years at Gettysburg. His writing is very good. The pity of it is that the first third of the book is marred by a complete lack of maps; otherwise, it is a superior account, with excerpts from letters, memoirs, and other personal accounts of soldiers on both sides, from the highest officers to the lowest privates, of the battle. If you can lay your hands on apporpriate maps, I would recommend this book unreservedly. Even then, if you can stand not knowing what Pfanz is talking about for about 100 pages out of this 600 page book, then read it anyway.… (more)
1 more
LibraryThing member ksmyth
The first of Pfanz's excellent books about the Battle of Gettysburg. Pfanz was a superintendant at Gettysburg, and knows the ground well. It isn't surprising that the very best aspect of this book are the maps, which are numerous and excellent. This book focuses on Longstreet's assault on July 2nd, through the Peach Orchard/Wheat Field, Devil's Den and Little Round Top. The narrative is easy to follow. Highly recommended.… (more)
Fewer