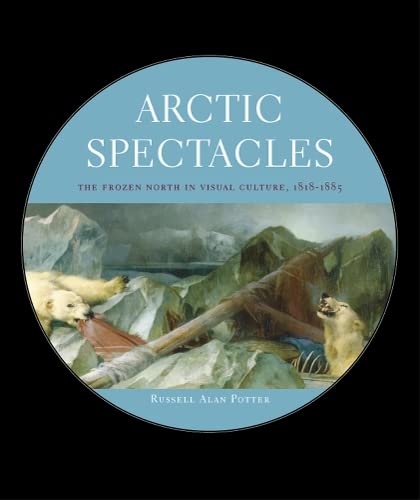 by Russell A. Potter

When every land seems already explored, and space travel has declined in scope and prestige, the northern exploits of our Victorian forebears offers a pleasantly distant mirror from which to regard our own time. The Arctic regions have been the subject of a long-lasting visual fascination, one which has from the outset crossed boundaries between fine art and mass entertainment, "high" and "low" cultures, and even national identity. In the mid-nineteenth century, this polar passion reached a peak, dominating the visual culture of both Britain and America, and yet its history is scarcely known. Arctic Spectacles: The Frozen North on Visual Culture, 1818-1875 illuminates the nineteenth-century fascination with visual representations of the Arctic, weaving together a narrative of the major Arctic expeditions with an account of their public reception through art and mass media. In a century that saw every corner of the globe slowly open to the examining eye of Western science, it was the Arctic - remote, mysterious, untamable - that most captured the imagination of artists and the public alike. Its impact could be seen in a range of visual media from fine art to panoramas, engravings, magic lantern slides, and photographs, as well as hybrid forms of entertainment in which Inuit were "exhibited" alongside a cabinet of assorted Arctic curiosities while Western gentlemen looked on. In a lively and accessible style, Russell Potter traces the story of the long, drawn-out exploration of the Northwest Passage and the beginnings of the push toward the North Pole, each new expedition producing its own artistic response. While early visual representations focused on the natural wonders of a world of magical beauty and purity, later responses would darken, as the public struggled to come to terms with the human toll of Arctic exploration: lives lost, reports of cannibalism, and a sense of purpose gone asunder. Drawing from letters, diaries, cartoons, and sketches, as well as oft-overlooked ephemera such as newspaper advertisements, playbills, and program booklets, Potter shows how representations of the Arctic in visual culture expressed the fascination, dread, and wonder that the region inspired, and continues to inspire today.… (more)

Fatal passage : the untold story of John Rae, the Arctic adventurer who discovered the fate of Franklin by Kenneth McGoogan
The ice master : the doomed 1913 voyage of the Karluk by Jennifer Niven
Narrative of a second expedition to the shores of the polar sea in the years 1825, 1826, and 1827. Including an account of the progress of a detachment to the eastward by Sir John Franklin