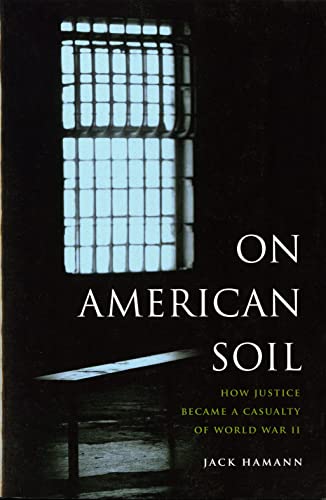 On American Soil : How Justice Became a Casualty of World War II

On a hot August night in 1944, a soldier's body was discovered hanging by a rope from a cable spanning an obstacle course at Seattle's Fort Lawton. The body was identified as Private Guglielmo Olivotto, one of the thousands of Italian prisoners of war captured and brought to America. The murder stunned the nation and the international community. Under pressure to respond quickly, the War Department convened a criminal trial at the fort, charging three African American soldiers with the lynching and first-degree murder of Private Olivotto. Forty other soldiers were charged with rioting, accused of storming the Italian barracks on the night of the murder. All forty-three soldiers were black. There was no evidence implicating any of these men. Leon Jaworski, later the lead prosecuter at the Watergate trial, was appointed to prosecute the case and seek the death penalty for three men who were most assuredly innocent. Through his access to previously classified documents and the information gained from extensive interviews, journalist Jack Hamann tells the whole story behind World War II's largest army court-martial - a story that raises important questions about how justice is carried out when a country is at war. --Publisher.… (more)

Skid road : an informal portrait of Seattle by Murray Cromwell Morgan
Alaska-Yukon-Pacific Exposition : Washington's first world's fair : a timeline history by Alan J. Stein
Nisei daughter by Monica Itoi Sone
Gay Seattle: Stories of Exile and Belonging by Gary Atkins
Blazing the way; or, True stories, songs and sketches of Puget Sound and other pioneers by Emily Inez Denny
13 more
Arc of justice : a saga of race, civil rights, and murder in the Jazz Age by Kevin Boyle
The Good Rain: Across Time and Terrain in the Pacific Northwest by Timothy Egan
Impounded : Dorothea Lange and the censored images of Japanese American internment by Dorothea Lange
The train to Crystal City : FDR's secret prisoner exchange program and America's only family internment camp during World War II by Jan Jarboe Russell
Doc Maynard : the man who invented Seattle by William C. Speidel
The Few: The American "Knights of the Air" Who Risked Everything to Save Britain in the Summer of 1940 by Alex Kershaw
Bound for Canaan: The Epic Story of the Underground Railroad, America's First Civil Rights Movement by Fergus M. Bordewich
Seattle, now & then by Paul Dorpat
The white cascade : the Great Northern Railway disaster and America's deadliest avalanche by Gary Krist
Seattle: Then & Now by James Madison Collins
Washington : a centennial history by Robert E. Ficken
Puget's Sound : a narrative of early Tacoma and the southern Sound by Murray Cromwell Morgan
Triangle : the fire that changed America by Dave Von Drehle
Fewer