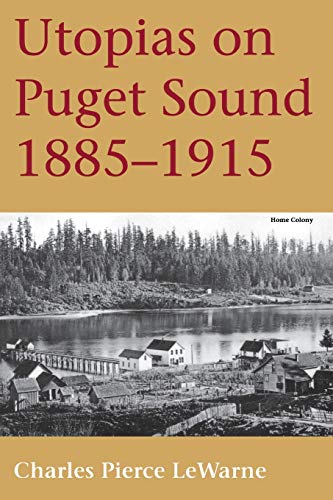 Postmaster General James A Farley's famous toast ?to the forty-seven states and the soviet of Washington? introduces and sets the tone for this study of Washington State radicalism. The state's colorful reputation for radical movements was established in the 1920s and 1930s by free speech fights, strikes, strong labor organizations, and woman suffrage reforms. Charles LeWarne finds the roots of this radicalism in the communitarian experiments of the late nineteenth century. Through analyses of several of these experiments, LeWarne demonstrates that the influence of a coterie of liberals and radicals centered on Puget Sound in such communities as Home, Burley, Freeland, Equality, and Port Angeles was felt in the state long after the ?utopias? they came to colonize had ceased to exist. Probably the most famous of the experiments was Home Colony on Joe's Bay near Tacoma. From a nucleus of three families, Home grew to over two hundred residents and lasted for more than twenty years. Its reputation for anarchism and flamboyance contributed to a jail sentence conviction for one editor of the Home newspaper for publishing an editorial called ?The Nude and the Prudes.' Readers interested in current social movements and lifestyles will find many enlightening parallels with recent communal attempts, particularly the rejection of traditional values and the belief in a perfectible world. Whatever the differences within individual colonies, the communitarian ideal has certain general characteristics that find their way into each of these attempts to form a perfect society. Historians will welcome this treatment of an important part of the social and cultural history of the area. The book contains a mine of previously scattered information on the subject. It is a delightful footnote to the history of the Puget Sound region.… (more)

Puget's Sound : a narrative of early Tacoma and the southern Sound by Murray Cromwell Morgan
The last wilderness by Murray Cromwell Morgan
Seattle: Then & Now by James Madison Collins
Skid road : an informal portrait of Seattle by Murray Cromwell Morgan
Exploring Washington's past : a road guide to history by Ruth Kirk
22 more
Washington : a centennial history by Robert E. Ficken
Whistlepunks & Geoducks : Oral Histories From the Pacific Northwest by Ron Strickland
Seattle now & then by Paul Dorpat
Washington State place names by James Wendell Phillips
The untamed Olympics; the story of a peninsula by Ruby El Hult
Oysterville : roads to grandpa's village by Willard R. Espy
Marrowstone by Karen Russell
Pioneer Square : Seattle's oldest neighborhood by Mildred Tanner Andrews
Alaska-Yukon-Pacific Exposition : Washington's first world's fair : a timeline history by Alan J. Stein
One Man's Gold Rush: A Klondike Album by Murray Morgan
Seattle Now & Then: Volume 2 by Paul Dorpat
Seattle by Nard Jones
The Northwest Coast: Or, Three years' Residence in Washington Territory by James G. Swan
Native Seattle : histories from the crossing-over place by Coll-Peter Thrush
Washington, a bicentennial history by Norman H. Clark
The Canoe and the Saddle; or, Klalam and Klickatat by Theodore Winthrop
Denny's Knoll : A History of the Metropolitan Tract of the University of Washington by Neal O. Hines
Digressions of a Native Son by Emmett Watson
The Indians of Puget Sound by Hermann Karl Haeberlin
Omak me yours tonight, or, Ilwaco million miles for one of your smiles: A Ballard of Washington State by Willard R Espy
Island Year by Hazel Heckman
Name on the schoolhouse : an anecdotal list of some historic names of schools in Washington State by Kenneth L. Calkins
Fewer