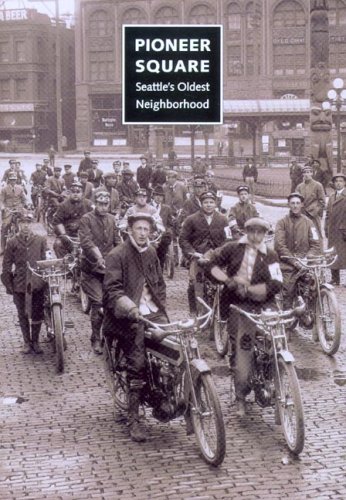 This fascinating history weaves together first-person accounts, photographs, and varied cultural perspectives to shed light on the birthplace of modern Seattle. It reveals that Pioneer Square has always been a barometer of Seattle's health and an incubator for trends that characterize the city today. In 1852, a group of settlers who had spent the winter on Alki Beach relocated to the east side of Elliott Bay and chose the only flat area along the shoreline for the first settlement in downtown Seattle, Pioneer Square. Called Djicjila'letc, "little crossing over place," by friendly Duwamish Indians, it was near the heart of their ancient homeland. By 1853, Henry Yesler's steam-powered sawmill was processing and exporting timber from the densely forested hillsides. Other businesses sprang up near the mill, making Seattle the region's major commercial center and a magnet for workers and entrepreneurs. The assimilation of people of diverse ethnic, cultural, and economic backgrounds continues today, as one of Pioneer Square?s defining characteristics. After the Great Fire of 1889, Seattle rallied to build a modern city of brick and stone. Pioneer Square rose quickly from the ashes with elegant brick buildings that still give the area an architecturally harmonious feeling. The district formed the heart of the city upon the arrival of the Great Northern Railroad and during the Klondike Gold Rush. As the population exploded, city engineers scrambled to regrade steep hills and fill in tide flats to make them suitable for development. In the early twentieth century, overcrowded Pioneer Square burst at its seams: the downtown business district moved north, industries surged south onto reclaimed tide flats, and Chinatown and Japantown spread east into what is now the International District. As Pioneer Square deteriorated, a local minister dubbed it Skid Road, applying the name of the mill logslide (now Yesler Way) to people on the skids. The term later entered the national vernacular as a synonym for urban slum. From the late 1950s the neighborhood became a battleground between advocates of urban renewal and those who envisioned a restored district of handsome buildings, outdoor cafes, and an easy mingling of artists, merchants, and the down-and-out. Architects, gallery owners, activists, and many others recognized that Pioneer Square was not only a place of beautiful buildings, but a place of spirit as well. In 1971, the City of Seattle created the thirty-block Pioneer Square Historic District, the first designated landmark district in the city. In the ensuing decades the neighborhood, which never lost its Skid Road identity, became a vibrant center for the arts and a hub of regional transit, urban living, and professional sports.… (more)