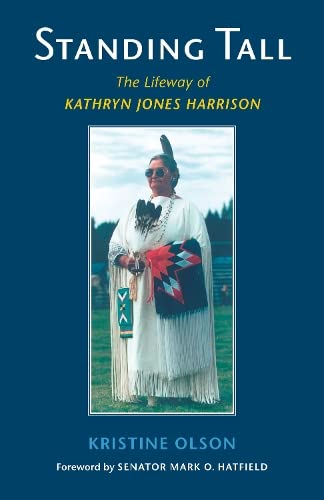 Standing tall : the lifeway of Kathryn Jones Harrison, chair of the Confederated Tribes of the Grand Ronde Community

How does a woman survive a concerted campaign to deny her humanity, by the government at the national level and by her foster parents and spouse at the most intimate level? Standing Tall, the biography of Oregon tribal leader Kathryn Jones Harrison, recounts the Grand Rondes' resurgence from the ashes of disastrous federal policies designed to terminate their very existence. The tribe's revival paralleled -- and was propelled by -- Harrison's determination to overcome daunting personal odds. Harrison's life story puts a human face on the suffering wrought by twentieth-century U.S. Indian policy. Historic and contemporary photographs enliven the text and depict the trauma of forced assimilation. Former Senator Mark Hatfield's foreword places Harrison in the annals of Native leaders, where her generosity of spirit shines through as she seeks to contribute to the communities that threatened to engulf her tribe's homeland. The Grand Rondes have achieved national renown as the "little tribe that could," and at the forefront for over two decades stood four-foot eleven-inch Kathryn Harrison. Her pragmatic and farsighted leadership through the burgeoning casino economy and the demands of cultural repatriation resonated throughout Indian Country to Capitol Hill and New York's American Museum of Natural History. Yet the company of everyday women -- ancestors, lifelong and newfound friends, and tribal colleagues -- was what sustained her. Harrison's story models the survival skills of adaptability, endurance, patience, and sheer grit coupled with the courage to stand up to confront crusading power.… (more)