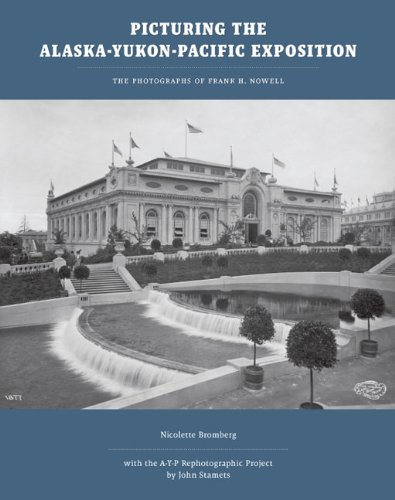 Picturing the Alaska-Yukon-Pacific Exposition : the photographs of Frank H. Nowell

For those who experienced it, the Alaska-Yukon-Pacific Exposition was a time of wonder in a "citadel set in stars" -- a grand world's fair that transformed the summer of 1909 in Seattle into a whirl of excitement and pleasure. On what would become the University of Washington campus, for a brief moment a huge city emerged. At noon on June 1, amidst the blasting of horns and whistles, confetti filled the air and the gates were opened to a pent-up crowd of about 80,000 fairgoers. At the end of the evening on October 16, the fair was over and the magical city became a memory for its 3.7 million visitors. For those who couldn't make the trip to see the exhibits and for the rest of us today, the best record of the event was made by Frank H. Nowell, official photographer for the exposition. He documented the construction of the city, its landscaping, the people who built it, and the people who visited it, as well as the buildings that housed displays from dozens of foreign countries. He used a large view camera and 8 x 10 glass-plate negatives to create several thousand photographs. For this book, Nicolette Bromberg has chosen the best and most representative. Her essay illuminates both the man and the fair, providing perspective to a history of the West that connects us to a world-expanding event a hundred years ago, and also contains Nowell's photographs of Alaska during the gold rush, relating how an Alaskan photographer became the official A-Y-P photographer. For the 100th anniversary of the exposition, John Stamets organized and led University of Washington students in a project to rephotograph the site. This book includes an essay by Stamets describing the challenges, delights, and problems of the project, along with thirty rephotographs that imagine the fabulously spectacular ghost city on the campus.… (more)