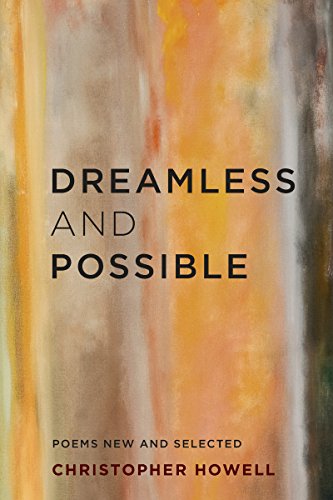 ""For nearly four decades Christopher Howell has so ably been marrying the miraculous to the mundane; the invisible world to the here-before-our-eyes; the wacky to the expectable; the meditative to the pratfall-prone; the immediate to the ghost-ridden; and the mirthful to the elegiac--and marrying them with such authority--it's no wonder that by now my head is full of their progeny. ̀The Moon is up on its hind legs/over the shed,' he says, and... yes, there it is, in the sky in my brain, just (as so much turns out to be) the way Christopher Howell describes it."--Albert Goldbarth" ""Finally having the best of Christopher Howell's work of the past thirty or so years is a great gift to the readers of poetry. His voice is grave, irreverent, funny (at times) and his newest poems are also lighted by (I know this is a dangerous word) wisdom. Godspeed this book into the hands of many readers!"--Thomas Lux" ""Sometimes reading a poet feels like surfacing. You find yourself in a huge world, achingly strange and familiar. Howell's work has that charge: the clarity of trance and the jolt of waking. His new book is the distillation of an oeuvre, attentive to the future and the origins, incandescent with loss. Dreamless and Possible is a testament, a stunning and visceral collection from one of America's most necessary poets."--D. Nurkse" ""Christopher Howell exults in ̀the common mysteries of lives,' and his capacious vision is especially displayed here with poems from over the course of thirty years, during which he has written dramatic monologues, rhymed lyrics, haunting narratives, and elegies that are both redemptive and terribly sad. and while the bewildering world șways on its pins,' we come away from his poetry with the curious belief that we are--somehow, strangely, by what?--blessed."--Lucia Perillo" ""A magnificent collection, by an exceptional voice and talent, one that enriches all of us writing and reading poetry in these times."--Christopher Buckley" "This generous volume of new and selected poems by Christopher Howell encompasses three decades of his distinguished work, drawing upon all of his previous books. Dreamless and Possible chronicles his wide range of interests, expressed by blending elements of the surreal with biography, imagist economy with a storyteller's informality. It also shows the development of his signature style, a style reflected, as poet Albert Goldbarth has written, in poems "connected by deep thought worn lightly, and by large vision writ in small details."" "These are poems of palpable force. Howell thinks out loud as he works his way through what charms, challenges, and defines the human project. He questions, tests images and associations, and he leaps, trusting himself, into midair. In consequence, the cerebral energy propels his poems beyond statement and into startlingly evocative modes, grappling with and sifting profound matters of memory, imagination, and grief, tempered always by joy."--BOOK JACKET.… (more)