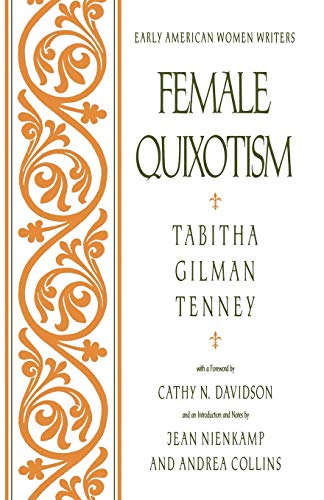 Female quixotism : exhibited in the romantic opinions and extravagant adventures of Dorcasina Sheldon

The Early American Women Writers series offers rare works of fiction by eighteenth- and nineteenth-century women, each reprinted in its entirety, each introduced by Cathy N. Davidson, who places the novel in an historical and literary perspective. Ranging from serious cautionary tales aboutmoral corruption to amusing and trenchant social satire, these books provide today's reader with a unique window into the earliest American popular fiction and way of life. First published in 1801, Female Quixotism is a boisterous, rollicking anti-romance and literary satire. It takes place in the fictional village of L---, Pennsylvania, where its central character Dorcas Sheldon--who styles herself the romantic "Dorcasina"--sets out on a quixotic quest for thekind of romantic love portrayed in her favorite English novels. Having rejected the prosaic yet honorable advances of her first suitor, "Lysander," Dorcasina narrowly escapes marriage to a series of unscrupulous rogues interested mostly in her considerable fortune. Moving from one misadventure toanother, the heroine's journey ends in a lonely old age bereft of romantic illusion. Female Quixotism was written during a period of self-definition for the fledgling American republic, and offers a telling glimpse of gender, race, and class issues--as volatile then as they are today. Its woman's-eye view of the life and literature of the age provides a tragicomic parody ofthe limited choices available to women in a society dedicated to the principle that all men are created equal.… (more)

LibraryThing member noveltea
The hilarious adventures of a woman who believes everything she reads--and the only thing she reads is romance fiction. This early American novel is both more interesting and more accessible for a modern reader than Charlotte Lennox's The Female Quixote. And since Tenney's novel sticks with its misguided, self-styled heroine for her whole life, it's also both more affecting and more effective as a cautionary tale.… (more)