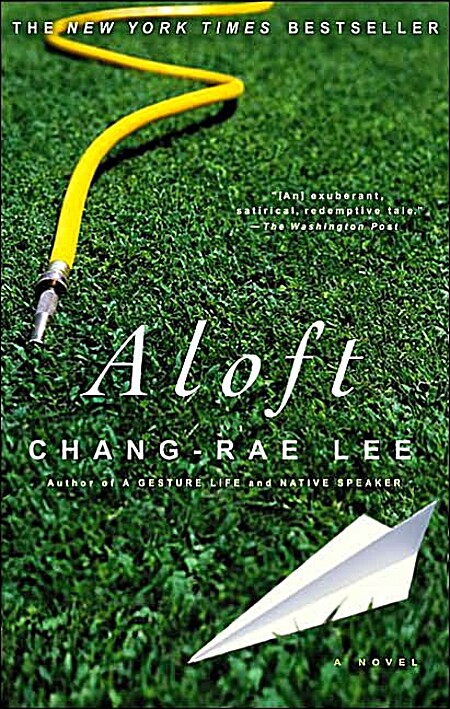 New York times bestseller Aloft follows the life of a suburban, white, middle-class man during a time of family crisis. Jerry's favorite diversion is to take his small plane and fly solo over Long Island. When his daughter and her fiance arrive from Oregon to announce their marriage plans Theresa's dangerous pregnancy, he thinks back over his life and begins to face his disengagement with it and with his relationships with others: with his deceased wife, the circumstances of whose death has never fully admitted to; with his former girlfriend, whom he still longs for; with his pregnant daughter, who refuses to address the cancer that is killing her; with his son, who is losing the family business; and with his father, who is in a nursing home. Aloft is a quiet yet intense study of family, the American dream, and the American character.… (more)

LibraryThing member grrjessi
Really good and readable book. I identify with the characters - a little detached, a little apathetic, a little damaged, a little sorry. I cried at the end. I would recommend this book.
11 more
LibraryThing member Periodista
Reminds me of Richard Ford--the way Lee inhabits this late middle-aged landscaper at loose ends and confused by his grown children and their virtual stepmother (he's a long-time widower) who's left him for a richer, classier rival.

There's something of Updike's Rabbit too--a less raunchy, less spiritually (transcendentally?) inclined, less current events-aware Rabbit, but I'm going with Richard Ford. Also Lee has created a character that 's much older than he is, while Updike and Ford--like so many other male novelists of their generation and slightly older ones--had already been there, done that, so their male protagonists (aren't they always?) by the time the characters appear on the stage.

This is not what I expected of Lee at this stage in his career. He's a good, observant writer, but I guess I'm just not that interested in spending so much time in the head of a comfortable, affluent middle-aged guy who doesn't know enough to appreciate his good luck.… (more)
LibraryThing member LukeS
This is a touching story in which an American man living on Long Island learns to come out of the clouds, literally, and accept some of his responsibilities on the ground. Not that he's acted irresponsibly, it's just that he is distant from his loved ones. It's a lovely, obliquely written (in accordance with the character's oblique relationships), piece with a highly appropriate and memorable ending.… (more)
LibraryThing member hprather
Not out of this world but a decent book. I liked his writing style, but the story was not as broad as I thought it could have been. A good story and good writing, but something somewhere just didn't knock it out of the park. I would recommend reading, but just have mediocre expectations.
LibraryThing member mzonderm
I guess the point of this book is that it's kind of apathetic and just sort of drifts along with no particular direction. Which is all well and good, except that it doesn't make for a very good read. It's sort of boring and annoying. In this book, all the characters are flat, and rather unlikeable. Due to the first-person narrator, we don't even get much of a sense of the other characters; they're just sort of background-noise to the non-story being told. The effect is that we never really feel connected to the story, and don't really care about any of the characters. Also, our first-person narrator has an extreme tendency to ramble in run-on sentences. As a literary technique, I don't mind this too much, but when the character himself is boring, any little quirk in his voice becomes grating.… (more)
LibraryThing member msjoanna
This book is the story of a soon-to-be sixty year old father, boyfriend, widower, and son. The story tells the intimate and inner thoughts of the main character. The characters are well developed, the thoughts are insightful, the writing is good. The book reminds me of the writing of Richard Russo -- the somewhat sad story of an ordinary man with an ordinary life where not everything had worked out the way he might have hoped. Reading the inner monologue of Jerry Battle as he struggles to reach out to his family and girlfriend and as he fights against his tendency to just float along distantly, I felt frustrated and sad for the main character. The author managed to bring me into the head of the protagonist. Somehow, though, rather than feeling inspired by the efforts of the protagonist, I just felt defeated and deflated.… (more)
LibraryThing member WittyreaderLI
A middle aged man with a very boring family lives on Long Island. Blech
LibraryThing member pinetastic
Wonderfully written. I wasn't all that into the protagonist, middle aged guy. Thought he was rather pathetic and uninteresting.
LibraryThing member BookConcierge
Audiobook performed by Don Leslie

From the book jacket: Aloft offers a reexamination of the American dream from the inside out, through the voice of Jerry Battle, a suburban middle-aged man who has lived his entire life on Long Island, New York. Battle’s favorite diversion is to fly his small plane solo; slipping away for quick flights over the Island, Jerry has been disappearing for years. Then a family crisis occurs, and Jerry finds he must face his disengagement in his relationships.

My Reactions:
Jerry Battle is the narrator of this character-driven novel. It is his unavailability – emotionally and physically – that colors all the relationships he has. He reflects on his deceased wife, Daisy, who is apparently bi-polar, and her death, but seems really not to understand (or want to face?) what really happened. His long-term live-in girlfriend has left him, though she is still a part of his family circle since she basically raised his children and they love her. He cannot seem to admit – to himself, or more importantly to Rita – how much he misses her, or how culpable he was in destroying their relationship.

He prides himself on how well he has handled his wife’s death, raised their children alone, and managed the family business, but he seems completely unaware of what is really going on. At times he behaves like a teenager – getting into ridiculous contest to prove to his ex-girlfriend, her current fiancé, and/or to himself that he is really THE ALPHA MALE. And then he’s perplexed by his own son’s need to prove the same … with a bigger house, fancier cars, etc.

My reactions to Jerry were as puzzling as his own reactions to what’s going on around him – I was angry, confused, frustrated, ready to give up, wanted to go on, and ultimately loved him and his family. I’ll definitely try another of Lee’s novels.

Aloft is a novel about an ordinary man fast approaching 60 who is questioning his ability to engage in life. His loved ones accuse of him of taking the easy route by distancing himself emotionally when life gets tough. This is exemplified by his love of flying his small plane, alone, as a means of escape. The book is told in the first person tending toward a stream of consciousness style, fairly coherent but slow moving.

It’s a nice little story, well written and occasionally humorous, but it seems to be more about the craft than engaging the reader. “Sure I tagged along a couple of times with some guys on the crews to a Giants game at the Stadium, but I couldn’t quite muster the flushed-neck hoorahs of my spittle-laced compadres, and I’d only rise halfway to the occasion, getting up on my toes for a big play and groaning in concert with the thousands and drinking maybe one jumbo brew too many. Afterward I’d just trudge down the banked exit ramp with only a syncopated tic in my gut, a half-lurch like nothing really got started, never quite feeling the pure sheer liberty that comes from stomping your feet and hollering out your lungs because some burly throwback with a digit sewn onto his shirt has just dived for and reached a certain chalk mark on the field.”

Chang-rae Lee does an excellent job of capturing an ordinary man who has tried to coast through life emotionally, eventually forced out of his comfort zone by the women in his life coupled with family crisis. The narrator, however, is the only character that is well developed and he is, well, ordinary so failed to rouse my interest much of the time. The occasional passage that resonated wasn’t enough to overcome the pace and my lack of interest in the characters and storyline.… (more)
LibraryThing member Opinionated
Lee's first 2 novels, "Native Speaker" and "A Gesture Life" are two of the best novels I've read in recent years, his precise characterisation and subtle plot threads making them hard to put down

Aloft, although enjoyable, doesn't reach the heights of these 2 works. Whilst the book's protaganist, Jerry Battle, is sharply drawn, the motivations and behaviours of the other main characters are hazy. Perhaps this is deliberate - a device for showing that Battle has never sufficiently emotionally connected with his friends and family to see them other than in broad brush strokes; but for me it makes the book ultimately unsatisfying

The main theme of the book is avoidance; Battle avoids confronting the emotional needs of his family and girlfriends, and especially the mental deterioration and demise of his now dead wife. Learning from him, his daughter avoids thinking about and acting on her recently diagnosed cancer; his son avoids thinking about the impending implosion of the family business, his son in law avoids the crisis in his writing

Battle is gradually learning to deal with the everyday crisis of family life, and the moral tone of the book is that his family would all be stronger and mentally healthier with greater engagement from him. Perhaps this is true - but the characters are so shallowly drawn that its difficult to care. I found little empathy with or understanding of Battle's daughter Theresa and son Jack, and particularly his longtime girlfriend Rita. Why Rita should have been attracted to Jerry, have chosen to stay with him for more than 20 years, and be tempted back to him, is a complete mystery.

Lee writes well, and as always his dialogue is completely convincing. But although Aloft is a pleasant enough pastime, I was left with a feeling that it was ultimately trivial for a writer of Lee's undoubted talent… (more)
LibraryThing member joanoreilly
Ok, admittedly the narrator is a little wordy--make that a VERY--which in fact is why I love this book. The sheer incandescence of thought which drives the narrator, the second son of an aggressive overbearing father, drives the book. Here is sublime musing on existence through his own existence and the loss of his wife's existence. Here is a man so traumatized by the death of his wife that thirty years later, that he still exists in a state of existing nonexistence. He is aloft--circling above the real world--ready to come down only when the physical realities of life demand it--and only as far as function.
I enjoyed the author's voice as spoken through the narrator with surpring candor. I am sure it is a little too self-meditative for many, but that is why I enjoyed it.… (more)
Fewer