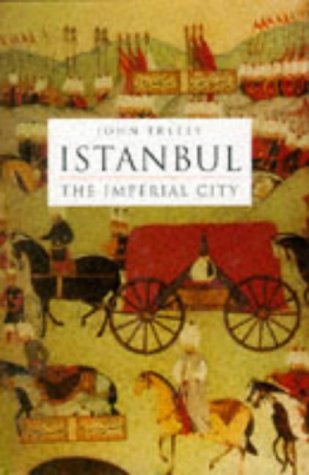 The Greek colony of Byzantium was transformed into Christian Constantinople in AD330 and became Islamic Istanbul after the Turkish conquest of 1453. Yet despite a succession of sackings, riots and earthquakes, it always managed to retain its unique atmosphere and appeal. For over 2000 years travellers have come, been dazzled by and taken home tales of its marvels and mysteries, its debaucheries and delights. John Freely tells the story of the city from its foundation to the present day, brilliantly capturing the flavour of daily life as well as court ceremonial and intrigue. He also includes a comprehensive gazetteer of all major monuments and museums.

LibraryThing member Finja2502
Great history of the city of Byzanz / Constantinople / Istanbul, and while learning a lot about the history of the city itself, it is also a great run through the history of the Byzantine and the Ottoman Empire. Engaging read, especially in the parts about all the intrigues in the Sultanat... x killed y, then z became sultan... unfortunately, it is almost impossible to keep track of the many names, but it is still a great overview.
Very nice is also the explanations about the sights in the city that still can be visited today. It is definitely no guidebook to the city, but after having read it onceI certainly knows much more about what Can be seen and visited in Istanbul.… (more)

The Fourth Crusade and the Sack of Constantinople by Jonathan Phillips
Istanbul : memories and the city by Orhan Pamuk
Midnight at the Pera Palace : the birth of modern Istanbul by Charles King