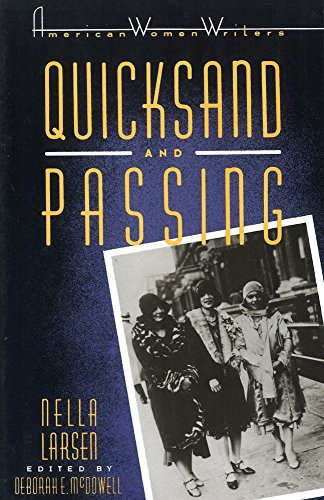 Quicksand (1928) is the first novel to give a voice to the sexual desires of a black woman. Helga Crane, the book?s protagonist, is trapped in the conflict between an active and a passive sexual behaviour, between sexual fufilment and middle-class respectability. Conflicts of race and sex even a religious conversion cannot resolve. Passing, written a year later, is overtly about black people who ?pass? for white, but in a veiled way it also is the desire of one woman for another - a new and daring theme for the writing of the time. The eroticism and sexuality that Nella Larsen was only able to whisper has in recent times been spoken loud and clear by Gayl Jones, Alice Walker, Ntozake Shange and many other black women writers who recognize Nella Larsen as a pioneer and inspiration.… (more)

LibraryThing member wendyrey
Two short novels from an African-American woman writer of the 1920s and 30s. Well written stories that i enjoyed more than expected. 'Passing' is mainly the story of a mixed race woman who spent a lot of her life 'passing' as a white person in a time when it mattered.

Their Eyes Were Watching God: A Novel by Zora Neale Hurston
Invisible man by Ralph Ellison
Our Nig; or, sketches from the life of a free black : in a two-story White House, North by Harriet E. Wilson
Sula by Toni Morrison
Mama Day by Gloria Naylor
2 more
For colored girls who have considered suicide / when the rainbow is enuf: a choreopoem by Ntozake Shange
Lucy by Jamaica Kincaid
Fewer