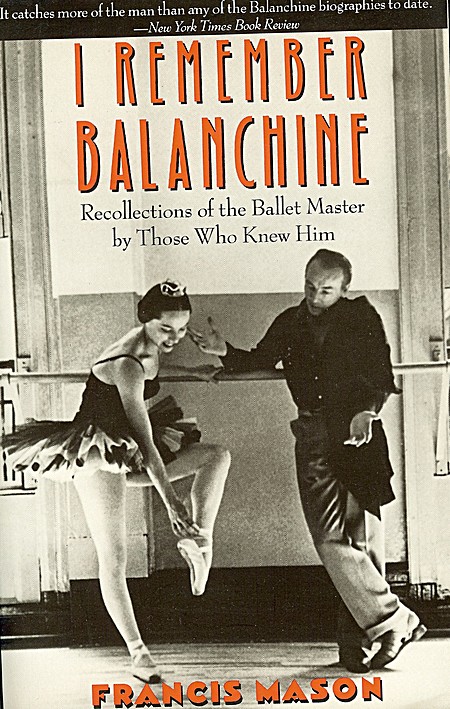 I remember Balanchine : recollections of a ballet master by those who knew him

An unforgettable biography of one of the most important and influential creative artists of our time. Alexandra Danilova and Tamara Geva recall the early days in Russia; Lincoln Kirstein shares the correspondence that first brought Balanchine to America; Maria Tallchief recalls the enormous success of Firebird in 1949. Balanchine¹s experiences on Broadway, in Hollywood, at the Metropolitan Opera, and in the circus are described by 85 of the dancers and collaborators whose lives were changed by him, such as Moira Shearer, Jacques d¹Amboise, Peter Martins, Edward Villella, Ray Bolger, Patricia McBride, and Rudolf Nureyev.

George Balanchine, ballet master : a biography by Richard Buckle
Balletmaster : a dancer's view of George Balanchine by Moira Shearer
Choura: The Memoirs of Alexandra Danilova by Alexandra Danilova
Holding on to the air : an autobiography by Suzanne Farrell
Balanchine: a biography by Bernard Taper
15 more
George Balanchine: The Ballet Maker (Eminent Lives) by Robert Gottlieb
Balanchine, photo album and memoir by Steven Caras
Balanchine's ballerinas : conversations with the Muses by Robert Tracy
Portrait Gallery by Agnes De Mille
Secret muses : the life of Frederick Ashton by Julie Kavanagh
Diaghilev's Ballets russes by Lynn Garafola
Margot Fonteyn by Meredith Daneman
Dance is a contact sport by Joseph H. Mazo
Dancing on my grave : an autobiography by Gelsey Kirkland
Portrait of Mr. B : photographs of George Balanchine, with an essay by Lincoln Kirstein by Lincoln Kirstein
Mark Morris by Joan Ross Acocella
Bronislava Nijinska--early memoirs by Bronislava Nijinska
Ballerina: The Art of Women in Classical Ballet by Mary Clarke
Dance to the piper by Agnes De Mille
Sight Lines by Arlene Croce
Fewer