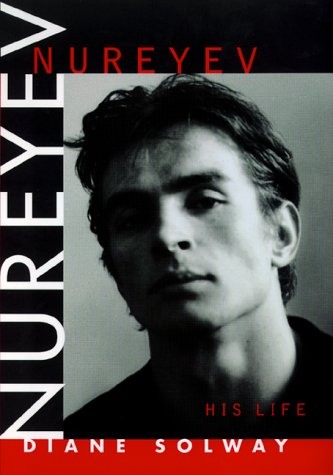 Everyone knows the name Rudolf Nureyev, but does anyone know the man behind the myth? Diane Solway does; she spent over four years and conducted more than 200 interviews with his family, his friends and lovers, his colleagues, and even his doctors to research Nureyev: His Life, the first book to capture him as he was onstage and off -- a great artist whose talent was matched only by his steely will to succeed.Here is his professional career: his famed partnership with Margot Fonteyn, his personal transformation of the Royal Ballet and the Paris Opera Ballet, his impact on dance companies all over the world, his collaborations with Martha Graham and Paul Taylor, and, behind all his accomplishments, the athletic grace and profound understanding that was his gift of genius. Here, too, is the private Nureyev: his Soviet childhood, his inner demons, the men and women who were willing to devote their lives to him. Solway chronicles his flamboyant, extravagant lifestyle, his celebrity-studded circle of friends -- Jacqueline Onassis, Andy Warhol, and Marlene Dietrich, to name only three -- his stormy love affairs, his homosexual promiscuit… (more)

LibraryThing member ivanlippi4
Solway traces Nureyev's remarkable climb out of poverty in the war-torn Soviet Union to become one of the century's most popular and influential artists.
1 more
LibraryThing member picardyrose
Didn't like it.
Fewer

Secret muses : the life of Frederick Ashton by Julie Kavanagh
Perpetual motion : the public and private lives of Rudolf Nureyev by Otis Stuart
Diaghilev's Ballets russes by Lynn Garafola
The Nureyev Image by Alexander Bland
Dancing on my grave : an autobiography by Gelsey Kirkland
18 more
Nijinsky by Richard Buckle
Choura: The Memoirs of Alexandra Danilova by Alexandra Danilova
Margot Fonteyn by Meredith Daneman
George Balanchine: The Ballet Maker (Eminent Lives) by Robert Gottlieb
Balanchine: a biography by Bernard Taper
Holding on to the air : an autobiography by Suzanne Farrell
Bronislava Nijinska--early memoirs by Bronislava Nijinska
Winter Season: A Dancer's Journal by Toni Bentley
Balanchine's ballerinas : conversations with the Muses by Robert Tracy
I remember Balanchine : recollections of a ballet master by those who knew him by Francis Mason
Balletmaster : a dancer's view of George Balanchine by Moira Shearer
Dancer : a novel by Colum McCann
George Balanchine, ballet master : a biography by Richard Buckle
Ballet 101: A Complete Guide to Learning and Loving the Ballet by Robert Greskovic
Once a dancer-- by Allegra Kent
Dance is a contact sport by Joseph H. Mazo
Martha : the life and work of Martha Graham by Agnes De Mille
Blood memory by Martha Graham
Fewer