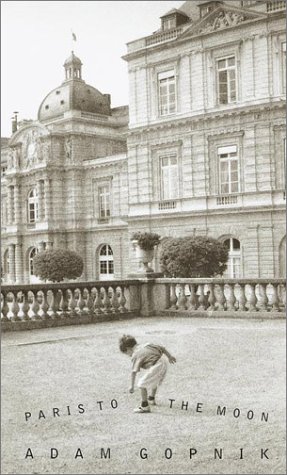 Paris to the moon

Paris. The name alone conjures images of chestnut-lined boulevards, sidewalk cafes, breathtaking facades around every corner-in short, an exquisite romanticism that has captured the American imagination for as long as there have been Americans. In 1995, Adam Gopnik, his wife, and their infant son left the familiar comforts and hassles of New York City for the urbane glamour of the City of Light. For Gopnik this was above all a personal pilgrimage to the undisputed capital of everything cultural and beautiful. So, in the grand tradition of the American abroad, Gopnik walked the paths of the Tuileries, enjoyed philosophical discussions at his local bistro, and wrote as violet twilight fell on the arrondissements. Yet, at the end of the day, there was still the matter of raising a child and carrying on with the day-to-day, not-so-fabled life. As Gopnik describes, the dual processes of navigating a foreign city and becoming a parent are not completely dissimilar journeys-both hold new routines, new languages, a new set of rules by which everyday life is lived. Weaving the magical with the mundane, he offers a wholly delightful, often hilarious look at what it was to be an American family man in Paris at the end of the twentieth century.… (more)

LibraryThing member RidgewayGirl
There are travel memoirs that become classics. While they take place at a particular time, they either manage to grasp what is eternal about a place or they perfectly capture a lost version of the place they're writing about. Down and Out in Paris and London captures the eternal of being poor in a great place, I think, and A Moveable Feast is a snapshot of a great time that is gone and still mourned.

Adam Gopnik's account of a American family living in Paris for five years falls into a second category; a book that is a snapshot of a time and a place, but one that is rapidly fading and which will be forgotten in a few more years. It's a very specific memoir, full of a young father's infatuation with his son, and it's the story of a specific family (well-to-do New Yorkers writing for The New Yorker) in a specific place (Paris, circa 1995).

Which is not to say that this is not a highly readable book. It is. But I suspect that my enjoyment of it is based on the similarities of our experiences. I lived in Paris for a year and we started our family in a European country and watched our children being not altogether American. So much of what I liked about it were the parts where our experiences overlapped. Gopnik interviewed Bernard-Henri Levy; I had a crush on Levy when I lived in Paris (I was taken with the idea that a philosopher could be a sex-symbol). Gopnik's wife had their second child in Paris; I had my two children in Munich, and found Gopnik's experience to be similar to my own. My time in Paris occurred just a few years before Gopnik's, so that I recognized his version of Paris more readily than I do Paris of today.

There are pieces of this book that are very, very good. The chapter on the trial and surrounding media storm of a French public official charged with war crimes was excellent and a brief segment on the French interviewee's astonishment over being called by fact-checkers was funny and thought-provoking.

There is simply a lot of this book that is specific to Gopnik's own experiences and which doesn't expand to universality. His search for an American-style place to work out, for example, or the long story of his son's first crush at age five. And while the reader gets an painstaking account of the bedtime story Gopnik told his son, complete with his son's trenchant commentary, there is almost nothing about his wife or how the move affected their relationship.

I loved this book, but I think that I loved it because of the memories it brought back, more than for the writing itself.… (more)
18 more
LibraryThing member aaronbaron
Gopnik's meditations on France are insightful, funny, and humanistic. He peels away layers of shiny French surfaces to reveal an ethos both alien and attractive to our Americanisms. Features an outstanding story of a beloved local restaurant resisting conglomeration, as well as a striking analysis of the antipodes of French thought: astute observation of the particular versus methodical classification of the abstract.… (more)
LibraryThing member justine
I loved this book so much!! It made me want to know this family and be in their Paris.
LibraryThing member iammbb
An eminently readable series of essays about an ex-patriate American family of three in Paris. The French bureaucracy does not fare well but that's not surprising. Gopnik is genuinely fond of the Parisians and gives the American reader insight into those qualities which we tend to disparage.
LibraryThing member rfewell
Cute memoir of an American writer/father in Paris navigating life there, while raising a small child.
LibraryThing member bnbookgirl
Rather tedious read. There was not a whole lot to discuss at book club. I was looking forward to much better things from this memoir.
LibraryThing member Replay
American guy living in Saint-Germain des Pres who eats escargots and smokes Gitanes. Kind of deja vu...
LibraryThing member ladydzura
Paris To the Moon isn't exactly a quick, easy read, as the stories it collects were originally printed as essays in The New Yorker and are wonderfully dense. Adam Gopnik moved with his wife to Paris shortly after their son was born, and stayed for the next five years, through the turn of the century and the birth of their daughter. Each chapter addresses its own topic, from finding an apartment to French politics, to high couture, to raising a son in a culture and surroundings in which his own parents are not entirely comfortable themselves.

This book captivated me, and is partially responsible for rekindling my own urge to spend some serious time not only in the City of Lights, but in the rest of France. Gopnik is witty and eloquent and captures perfectly the charm that I imagine Paris to have, all while patiently exploring and navigating the many differences between his native culture and that of his adopted city.… (more)
LibraryThing member jiles2
While reading this book on the Subways of New York, I felt as if I knew Paris, even though I'd never visited. Once I finally made it there last summer, my comfort level was immense, and the beauty of the city was subtly awesome. This book prepared me for a visit to the great metropolis in ways which other books cannot.
LibraryThing member rakerman
A calm and gently amusing series of essays about life in Paris in the late 1990s. An American in Paris, Gopnik goes beyond the usual outsider's view, trying the more challenging task of being self-reflective as well. Chapters exploring the French way of thinking and living intermingle with thoughts and stories about raising his young son.… (more)
LibraryThing member LireEnRoute
Lovely memoir of an American family in Paris. Great to get a better understanding of parent's transition to France.
LibraryThing member phredfrancis
I enjoy Gopnik's writing in The New Yorker and appreciate his views and observations. Unfortunately, it turns out that I don't really care all that much about quiet, thoughtful essays on life in Paris. Many people do. I don't. This is something I learned.
LibraryThing member csmirl
Always impressed by Adam Gopnik. My full review? here.Available at Teton County Library, call number 944.36 GOPNIK
LibraryThing member michigantrumpet
Articulate reflective compilation of articles written over five years from Pairs for the New Yorker Magazine. Gopnik brings an underlying warmth and affection for Parians, and adds a lovely self-awareness, whic allows him to discourse knowledgeably on the differences between life in New York and Paris. This was not a book to be gulped down in one sitting, but rather enjoyed as if each chapter (article) were a different course, or even meal. Enjoyed the discussion of couture fashion shows, soccer, a bureaucrat on trial for war crimes, and efforts to 'save' a favorite restaurant. 'The Rookie' was a personal favorite.… (more)
LibraryThing member maelinor
An American in Paris and how I envied him and his little family. This book is a collection of essays which give an insight to living in another culture and makes for interesting reading but is not a travel book per se. I think Mr Gopnik must be quite bilingual although he doesn't say so otherwise he wouldn't have fitted in as well as he did. Maybe things were different when he was there in the late 90s but Parisians are renown for their dislike of English speakers. His delightful child won me over and I really enjoyed reading about his exploits.… (more)
LibraryThing member Acia
A book with many layers

Some passages were poetic and beautiful.
LibraryThing member ParadisePorch
In 1995, Adam Gopnik, a writer for the New Yorker magazine, along with his wife and infant son moved from NYC to Paris.

From Paris to the Moon by Adam Gopnik photo 211686ce-fb8b-46ef-9e73-04f0426431e1_zpscunxnxnm.jpgThis book is a collection of his award-winning “Paris Journals” that he filed for the magazine. But unlike other books that are an assemblage of essays, this book is not choppy or undisciplined. It’s an intelligent, heartfelt look at the most beautiful city in the world at the turn of the twenty-first century. (Gopnik was there for Y2K but returned to America shortly thereafter.)

Some critics have complained that Gopnik’s essays are outdated, but I think they transcend time. He has captured the very heart of Paris culture and attitude. It’s well worth reading whether you’re planning to visit Paris or not.

I loved this book. 5 stars… (more)
LibraryThing member sarcher
Adam Gopnik has a way with language, but most of this book failed to work for me. The most successful passages deal with the mundane and the private aspects of their lives changed by their new environment. The author's son's experiences stand out in this respect, reflecting the burden of childhood as well as that of the expatriate.

The author often will use french words and vocabulary without explanation for the English reader - given that it's written for an American audience it's an odd choice. Sometime's it can be puzzled out from context, but often I was left just unable to imagine what his family is experiencing. (example: "gigot d'agneau avec flageolets" - something you eat, that's as far as I can get).… (more)
LibraryThing member grheault
Funny chapters on food, gyms, bureaucracy, and fashion shows. A little bit repetitive and name dropping, not so incisive as, for example, Joan Didion in The White Album capturing California, but overall a nice update on France circa 1995 -- funny to realize that cellphone were not ubiquitous then.
Fewer

Almost French : love and a new life in Paris by Sarah Turnbull
Through the children's gate : a home in New York by Adam Gopnik
Toujours Provence by Peter Mayle
Americans in Paris: A Literary Anthology by Adam Gopnik
My life in France by Julia Child
9 more
Tender at the bone : growing up at the table by Ruth Reichl
The Paris edition : the autobiography of Waverley Root, 1927-1934 by Waverley Lewis Root
Between meals : an appetite for Paris by A. J. Liebling
Paris Journal: 1944-1965 by Janet Flanner
Walks in Hemingway's Paris: a guide to Paris for the literary traveler by Nol︠ R. Fitch
Sixty million Frenchmen can't be wrong : why we love France but not the French by Jean-Benoît Nadeau
On rue Tatin : living and cooking in a French town by Susan Herrmann Loomis
The table comes first : family, France, and the meaning of food by Adam Gopnik
Seven ages of Paris by Alistair Horne
Fewer