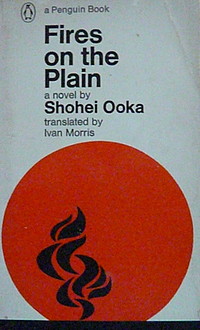 Fires on the Plain

"Written with precise skill and beautifully controlled power. The translation by Ivan Morris is outstanding." --The New York Times **Winner of the 1952 Yomiuri Prize** This haunting novel explores the complete degradation and isolation of a man by war.Fires on the Plain is set on the island of Leyte in the Philippines during World War II, where the Japanese army is disintegrating under the hammer blows of the American landings. Within this broader disintegration is another, that of a single human being, Private Tamura. The war destroys each of his ties to society, one by one, until Tamura, a sensitive and intelligent man, becomes an outcast. Nearly losing the will to survive, he hears of a port still in Japanese hands and struggles to walk through the American lines. Unfazed by danger, he welcomes the prospect of dying, but first, he loses his hope, and then his sanity. Lost among his hallucinations, Tamura comes to fancy himself an angel enjoined by God to eat no living thing--but even angels fall. Tamura is never less than human, even when driven to the ultimate sin against humanity. Shocking as the outward events are, the greatness of the novel lies in its uplifting vision during a time of crushing horror. As relevant today as when it was originally published,Fires on the Plain will strike a chord with anyone who has lived through the horrors of war.… (more)

LibraryThing member baswood
An extraordinary novel: a first person account of a conscripted Japanese soldier's fight for survival on a Philippine Island during the latter part of the second world war. It is a gruesome story told in that matter of fact way that seems to be the hallmark of English translations of Japanese literature, but also a keenly observed narrative of the natural world and the thoughts of an individual half crazed with hunger.

Originally published in 1951 this anti-war novel by Shohei Ooka drew on his own experiences as a conscripted soldier in the Imperial Japanese Army fighting on the Philippine islands. He survived the rout of his battalion by the American forces and witnessed the destruction of the vast majority of the men with whom he served. He was one of the lucky ones who became a prisoner of war and was eventually repatriated. Towards the end of the novel his protagonist: private Tamura reflects on his experiences as he tries to make some sense of the horrors of war and why he has been spared:

'People seem unable to admit this principle of chance. Our spirits are not strong enough to stand the idea of life being a mere succession of chances - the idea that is of infinity. Each of us in his individual existence, which is contained between the chance of his birth and the chance of his death, identifies those few incidents that have arisen through what he styles his "will" and the thing that emerges consistently from this he calls his "character" or again his "life". Thus we contrive to comfort ourselves: there is, no other way for us to think.'

During his sojourn on the Island when Tamura is lurching from one desperate situation to another he sees through the jungle a christian church, the sign of the cross beckons him down into a village. His search for salvation through a dimly remembered religion is brutally shattered by his own actions: a chance meeting destroys any hope that he will be saved.

The novel opens with private Tamura being slapped in the face by his squadron leader. He has just been released from a field hospital where he has spent three days suffering from consumption. The squadron leader deems him unfit to fight and therefore not worth sharing the limited food available, he is effectively cast out of the army and told to wait outside the hospital in the hope that he can be re-admitted. He is given six potatoes and joins a group of soldiers who are in a similar position camping around the hospital waiting to die. Chance enters the equation when an American war plane bombs and strafes the hospital, Tamura who is lucky enough to be able to walk, takes to the hillside jungle and forges his own path through the island, looking back down on the carnage below.

Tamura starts on a journey through the lush tropical island eating anything he can find to ward off starvation, despite or because of his light headiness he finds solace in the natural surroundings, the beauty of the natural world, as long as he can avoid the machinery of war and other people. He journeys through the hill country and reaches a flat cultivated plain area where he sees the bonfires. They become a mystery as to why they are lit, are they primitive smoke signals set off by the hostile indigenous population, or are they just part of the normal farming calendar. Tamura becomes fascinated by the columns of smoke: their form and intensity, their place in the natural world. Half starved he finds a hillside deserted cabin, with an abandoned potato crop, he stays, wondering what to do with himself. He is shaken from his reverie by four Japanese soldiers, led by an uncompromising corporal and feels it is his duty to follow them as they search for a way to get off the island. Tamura is soon back with the desperate column of defeated Japanese soldiers who are dying on their feet of hunger and their wounds. A desperate attempt to reach a rallying point is repulsed and individuals are reduced to cannibalism as all order breaks down.

The novel is a vivid description of the horrors of war and the desperate quest for survival. Tamura is not a young man having been conscripted late on into the army, but nothing of his previous experiences equips him to deal with the complete breakdown of civilised life that he encounters on the island. He wrestles with his own actions, how does he preserve his humanity, would he be better off dead? The beauty of the natural world is contrasted by the bestiality of human actions during wartime and Tamura's own slipping into semi delirium as a result of hunger fatigue and his illness.

From my point of view Tamura's thoughts and actions are those of a man from a different culture, certainly a different time and a man who might be more used to life in the raw and the vicissitudes of army life in wartime, but the author still manages to make his situation and his thoughts universal. The setting of the action on a tropical island where the beauty of the surroundings seems to intrude on the carnage of dead corpses makes for an authentic atmosphere. We are not spared the horror of putrefying bodies or the overwhelming stench of death, which permeate the novel, but wonder like Tamura wonders about the fires on the plains how humanity could be dealt such a savage blow. Would we in these circumstances remain sane? A five star read.… (more)
3 more
LibraryThing member stretch
A desperate Japanese army on a small Island in the Philippines, resorts to abandoning members of their own in a last-ditch effort to strengthen their ranks before the inevitable invasion. Private Tamura is one of these soldiers left to fend for himself, unable to return to his unit and unable to “pay” for treatment at the army hospital. Private Tamura is left to wander Leyte Island with neither a reason to live nor a reason to die. The instinct to survive is a powerful pull that lead Tamura to commit a cardinal sin against humanity.

Ooka's account of a starving Japanese soldiers attempt to rationalize and come to terms with the horrors of war that are all around him is both powerful and poetic. In utter isolation Ooka takes Tamura remains on the edge on insanity, allowing him explore the depths of despair to the simple joys of nature in same calm reasoning, giving Tamura's insights both beauty and terror. Even in his struggles to discern the differences between God and himself, Tamura is never too far from the logic and reasoning that forces him to survive his decent into hell… (more)
LibraryThing member arubabookwoman
The end of World War II is approaching, and the Americans have arrived on the island of Leyte in the Phillipines. The Japanese are fleeing to the west coast in hopes of being evacuated. Tamura was separated from his unit when he could no longer carry his weight foraging for food due to his illness. He is sent away, with one grenade to kill himself with, if he can't find a hospital unit to take him in.

'Why, when after all these years I had again been stirred by religious feelings and even been drawn to them by this village, should I have been forced to see only the mangled corpses of my fellow soldiers and the tortured body of Jesus painted by some unskillful artist? Was it fate that had contrived this cruel jest, or did the fault lie within myself?'

While this is an anti-war novel, and there are graphic scenes of death and destruction, the novel's focus is the philosophical and existential exploration by one soldier trying to determine his place in the world.… (more)
LibraryThing member azfad
powerful and shocking account of a japanese soldier adrift in the phillipines at the end of world war 2. also contains the memorable phrase 'ambiguous underpants'.
Fewer

Naomi by Junʾichirō Tanizaki
A dark night's passing by Naoya Shiga
Kokoro by Natsume Soseki
When I Whistle by Shusaku Endo
Masks by Fumiko Enchi
2 more
Nip the Buds, Shoot the Kids by Kenzaburo Oe
Death in midsummer, and other stories by Yukio Mishima
Fewer