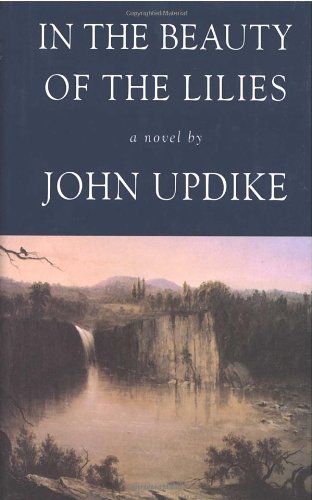 In the Beauty of the Lilies

John Updike's seventeenth novel begins in 1910, and traces God's relation to four generations of an American family, beginning with Clarence Wilmot, a Presbyterian clergyman in Paterson, New Jersey. He loses his faith, and becomes an encyclopedia salesman and a motion-picture addict. The remainder of Clarence's family moves to the small town of Basingstoke, Delaware, where his cautious son, Teddy, becomes a mailman. Faithless himself, Teddy marries a good Methodist girl and begets Esther, whose prayers are always answered; she becomes an object of worship, a twentieth-century goddess. Her neglected son, Clark, makes his way back to the fiery fundamentals of Protestant piety. The novel ends in 1990, in Lower Branch, Colorado, and on television. Taking its title from the "Battle-Hymn of the Republic," In the Beauty of the Lilies spins one saga, one wandering tapestry thread, of the American Century.… (more)

The New York Times
Domestic and epic, intimiste and magisterial, ''In the Beauty of the Lilies'' begins with a sly misdirection.
— 1 more
The New York Times
Now, in his dazzling new novel, "In the Beauty of the Lilies," Mr. Updike takes on an even more daunting project: to chart the fortunes of an American family through four generations and some 80 years, and in doing so, create a portrait of the country, from its nervous entry into the 20th century to its stumbling approach to the millennium.

LibraryThing member yourotherleft
In the Beauty of the Lilies is Updike's treatise on religion and American culture masked by the saga of several generations of the Wilmot family and wrapped up in the growing movie industry. The book has only four chapters, each one focused on a member of each generation. To start, in 1910, we meet Clarence Wilmot, a Presbyterian minister who finds that his faith has suddenly abandoned him. Even as he tries to seek out God and look for Him where he has found Him in the past, he is most assured that the God to whom he looked for his whole life's needs and his livelihood does not exist, has never existed. Unable to so much as preach a sermon, he soon finds himself relegated to selling subpar encyclopedias door to door, even to his former servant, in an effort to support his family even as his very life seems to ebb and his only refuge becomes the movie theatre.

Where Clarence leaves off, his son Teddy begins. Teddy is an insecure boy without goals who grows to be an underachieving man uncertain of his place in world and petrified at the thought of one day becoming a "rube." What he doesn't realize is that, "rube"-hood seems to be what life has in store for him. Forever impacted by his father's loss of faith and slow descent into death, Teddy has no time for God, and yet his story is perhaps the sweetest. When he marries his wife, a cripple, they have a child, Esther, Essie for short, who he and his wife shower with all the love they have to give which is no benefit to her. Secure in herself and confident that nothing will be denied her, Essie leaves her Wilmot name behind to pursue a career in the movies as the very famous Alma DeMott. Forever having love affairs and caring only about advancing herself at the expense of others, Alma believes that God exists and cares only for her selfish needs. Self-centered as she is, Alma makes a terrible mother to her son Clark who, in a desperate attempt to assert himself and do something meaningful after a meaningless, shallow childhood, joins a religious cult. It is with Clark that the Wilmot saga comes full circle until the thing that seemed to capsize the Wilmot family will be the very thing to heal it.

In the Beauty of the Lilies is a most complicated book. One can't help but feel that Updike is trying to accomplish many things with this narrative, and yet, by the end, trying to grasp his many meanings is an epic chore, and without this meaning, In the Beauty of the Lilies leaves a sour taste in your mouth. After so much depression and strife in the lives of the Wilmot family members, readers desperately desire more hope for them, and for us, than Updike seems to have to offer. Updike writes in long, dense paragraphs, and the lack of many chapter breaks in the book seem to make it that much longer and denser.

Many of Updike's characters are terribly difficult to sympathize with, but each is well-drawn with his or her motives and actions and flaws explored to their deepest extent. The writing is beautifully crafted and full of captivating descriptions and turns of phrase that can be both impossibly witty and wildly ironic. There's no doubt that Updike is a master of his craft as he expertly weaves together his saga of a struggling American family set against a backdrop of a centuries old faith that provided a foundation for our nation and Hollywood films that create an impossible and unrealistic standard of American life that have shaped our nation's psyche in ways that even we fail to realize. Updike uses Hollywood both to pace his story through the decades and to reveal an American people obsessed with stars and the idealized version of reality they project even as they abandon the Christian ideals that once grounded them and enabled them to endure the hardships of everyday life.

In the Beauty of the Lilies is not a book that I would recommend to the casual reader. It is not a happy, pleasant book. It requires a good deal of work to understand and even then leaves a lot of ambiguity that the reader must resolve. It's a book that definitely benefits from a group discussion and a careful eye as to what Updike has done. It's a book that I would be hard pressed to say that I liked, but all the same, it's a vivid story of realistic people that firmly lodges itself in the memory.… (more)
4 more
LibraryThing member fersher
I really enjoyed this book. It is divided into 4 chapters, each focusing on different generations of the Wilmot family. It was difficult to get through the first chapter because I found it to be very boring, but once I did I really started to like the book and its characters. For anyone who likes stories about family and how we are tied together (whether we like it or not) should give this book a try.… (more)
LibraryThing member nancynova
Family saga told in 4 parts. First is the father, a minister who loses his faith; then Tedddy, the youngest son, who finishes growing up in Delaware; then his daughter who becomes an actress; and finally, the best chapter, Clark, her son, who winds up in a Waco-type compound standoff.
LibraryThing member JosephKing6602
Great novel about a family across multiple generations. Updike can really write a sentence!!! I just love to follow his words...he had an amazing command of the English language.
LibraryThing member refice
Excessive prose bloats the insignificant details in this overwritten family saga.
The story spans four generations of the Wilmot family, starting with a faithless patriarch leaving the ministry and ending with an inveigled zealot defending a cult. Similarly, in-between generations are foils. The second consists of dubious slackers, hesitant and withdrawn, while the third is gregarious and charismatic, embodying the Protestant work ethic. Along the way the reader is treated to the lesson that good emanates from strong family ties, while evil results from lackluster parenting. Not to mention frugality is a virtue, extravagance amoral. Et cetera.
What is impressive is that Updike manages to squeeze all this pedantry into an allegory that is just a tick under 500 pages.