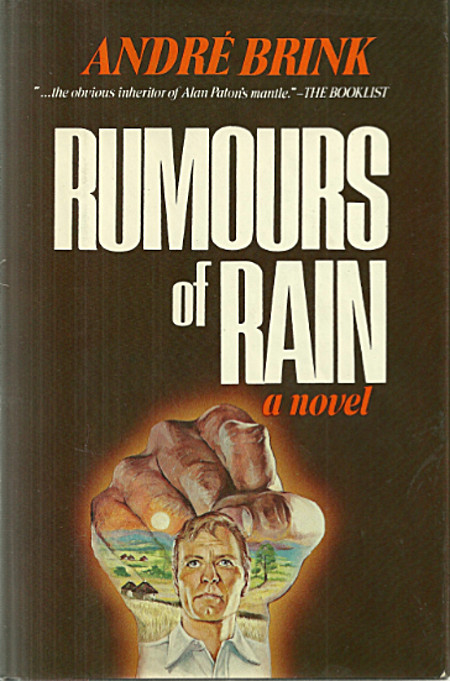 Rumours of rain : a novel

Winter in South Africa - a time searing drought, angry stirrings in Soweto, and the shadow of the Angolan conflict cast across the scorched bush. Martin Mynhardt, a wealthy Afrikaner, plans a weekend at his old family farm. But his visit coincides with a time of crisis in his personal life. In a few days, the security of a lifetime is destroyed and, with only the uncertain values of his past to guide him, Mynhardt is left to face the wreckage of his future.

LibraryThing member bodachliath
Brink's narrator Martin Mynhardt must have been constructed to personify the most unpalatable elements of apartheid South Africa and its Afrikaner ruling class. He is a rich and successful businessman and mine owner, who is arrogant, insensitive, exploitative, and misogynistic. As a narrative voice this takes some getting used to, but Brink's talent is such that one almost feels sorry for him by the end of this tale, which sees the cosy complacencies of his world, and his attempts to keep its various elements separate, dismantled piece by piece over the course of a long weekend. He emerges as a nuanced character, deeply flawed but very human. The portrayals of his friends and family are skilfully drawn but also somewhat symbolic - his best friend Bernard is a lawyer who has decided he has to fight the system and is on trial, and his son Louis has come back from military service in Angola deeply disillusioned and questioning.

The foreground events of the story cover Martin's reminiscences of a trip with his son to visit his mother on the family farm, which he needs to persuade his mother to agree to leave and sell. The narrative is full of asides and back stories, with many events and people alluded to long before their stories are revealed in detail. The events of the book seem all the more relevant given what happened a dozen years later - Brink's analysis of why the system had to change is impressive, perceptive and prophetic… (more)
2 more
LibraryThing member vaellus
If you took the best 15 pages out of this book, it would be a very good 15 pages. But there are about 400 other pages. This is a tendentious novel written as a retrospective rambling by a less than admirable Afrikaner businessman. It does cohere into a surprisingly dramatic whole in the end, but getting there through the thicket of trifle and annoyance is a trudge.… (more)
LibraryThing member Widsith
There comes a day when, for the first time, violence is used not because it is unavoidable but because it is easier. There comes a day when, for the first time, a leader is allowed to promote his own interests simply because he happens to be the leader. There comes a day when, for the first time, the weak one is exploited, not in ignorance but because he cannot offer resistance. There comes a day when, for the first time, a verdict in a court case is given, not on the basis of what is right but on the basis of what is expedient.

This long and angry dispatch from the heart of apartheid South Africa can be an oppressive read, though for understandable reasons. Less understandable, perhaps, were the frankly terrifying number of modern parallels that emerged from this putatively historical document.

The narrator at the core of the novel, Martin Mynhardt, is a hugely successful Afrikaner businessman and one of the very pillars of white-supremacist society, who thinks of himself as contributing to the good of his community and his country. He doesn't hate black people; rather, he likes to believe that apartheid is probably good for them, on balance. Extending real political power would be a mistake: ‘they've simply not developed far enough to handle such sophisticated forms of Western organisation. A matter of evolution.’

Through Mynhardt we're introduced to a complex web of interlinked friends, colleagues, lovers and family members who represent a cross-section of 1970s South African society, from the rural farmstead matron to the idealistic city student, the determined black businessman to the angry white activist; lawyers, witchdoctors, religious figures and expatriates, all of them ultimately grappling with the same basic fact of life.

If you have the stomach for it, experiencing the world through the eyes of a proponent of apartheid should be an educational experience. My problem was that – despite his ingratiating and plausible self-justifications – Mynhardt is made into something a bit too much like a cartoon villain. It is not enough for him to be a stalwart of racism; he is also a neglectful father, an unfaithful husband, an appalling friend, a heartless capitalist (‘people are essentially economic propositions’), a manipulative son and a serial user of the women he eyes up as ‘ripe and more than ready to be bruised’.

It may be that Brink is making a point about what's now called ‘intersectionality’ – the ways racism can be related to other social or sexual hierarchies and privileges. Indeed at one point, these links are made quite explicitly by one of Mynhardt's playthings:

“You're an Afrikaner, so you must be a male chauvinist.”

“I fail to see what the two can have in common.”

“Everything.” She sat down opposite me again, on the edge of the chair, her knees primly together. “Because this is a man's land, don't you see? Big-game, rugby, industries, power politics, racism. You Afrikaners have no room for women. The only place you assign to us is flat on our backs with our legs open for the Big Boss to in-and-out as he pleases.”

But I don't believe this is representative; the whole issue with apartheid, and similar systems, is that the people who support it are very often kind-hearted folks, good family-men, attentive partners and loving parents, who simply live by means of colossal, sustained acts of cognitive dissonance. By making Mynhardt wholly objectionable, Brink loses, I think, several opportunities to make us as readers sympathise with him, which would have been a much more troubling and interesting response than simply loathing him completely from start to finish.

‘I have tried with so much care,’ Mynhardt says towards the end, ‘to keep all the elements of my life apart and intact.’ His emotional apartheid is heading for a violent collapse that will mirror the one about to overtake society; as the riots break out in Soweto, there are symmetrical eruptions of tragedy and abuse in his own circle. Despite the novel's conceptual issues, it all makes for a very dark and powerful climax, as the rumours of rain finally end in the kind of downpour only Africa can produce. Read it for future tips as well as historical context.… (more)
Fewer

A chain of voices by André Philippus Brink