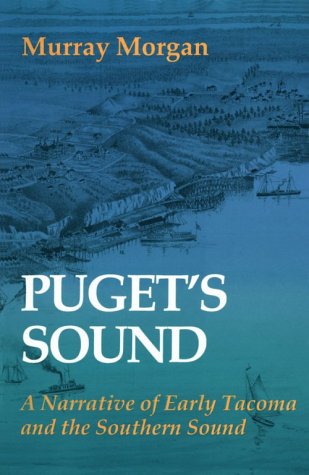 Puget's Sound : a narrative of early Tacoma and the southern Sound

"With the same ability to make personalities and events come alive that characterizes his classic Skid Road, Murray Morgan here tells the colorful story of Tacoma, "the City of Destiny," and southern Puget Sound, where many major events of Washington's history took place. Drawing upon original journals and reports, Morgan builds Puget's Sound around individuals, interweaving portraits of well-known historical figures with those who are more obscure but have a special significance: a colorful parade of saloonkeepers, politicians, union organizers, schemers, and swindlers. Morgan begins his account with the landing of Captain Vancouver in Puget Sound in 1792 and ends with the founding of Fort Lewis in 1916, the year the author was born. Between are the arrival of the transcontinental railroad, the boom-and-bust of lumber mills, the anti-Chinese riots of 1885, and more unique Northwest history that will intrigue both new arrivals and longtime residents. With a new introduction by historian and historic preservationist Michael Sean Sullivan, this redesigned edition of Puget's Sound brings new life to Morgan's landmark history of the South Sound and the early days of Tacoma."--Provided by publisher.… (more)

LibraryThing member craigim
Puget's Sound tells the history of Tacoma, Washington and the surrounding area from first contact with George Vancouver's expedition in 1792 through the start of the 20th century.

In grade school, I lived just down the street from Morgan and once interviewed him for a school project. During the interview, me and my partner quickly forgot the questions we had and ended up just listening fascinated as Morgan wove a story of the early history of Puyallup, a nearby Tacoma suburb. I brought along my dad's copy of Puget's Sound for an autograph, but hadn't gotten around to reading it until now, more than twenty years later.

Morgan is a great story teller and his history of Tacoma is a series of interwoven stories of the people, both locally and from distant Railroad and Wall Street board rooms, who shaped the city from a marshy rival to Seattle for the terminus of the Northern Pacific Railroad to a thriving industrial city.

Much has changed in Pierce County in the thirty years since the book was written, but the stories of the early settlement are still fascinating and I'd recommend this for anyone who is interested in the early history of Tacoma.… (more)

Puget's Sound : a narrative of early Tacoma and the southern sound by Murray Morgan (Paperback)

Seattle: Then & Now by James Madison Collins
The last wilderness by Murray Cromwell Morgan
Skid road : an informal portrait of Seattle by Murray Cromwell Morgan
Seattle, past to present by Roger Sale
Washington State place names by James Wendell Phillips
25 more
The untamed Olympics; the story of a peninsula by Ruby El Hult
Island in the sound by Hazel Heckman
Northwest passage : the great Columbia River by William Dietrich
Exploring Washington's past : a road guide to history by Ruth Kirk
Utopias on Puget Sound : 1885-1915 by Charles Pierce LeWarne
Washington : a centennial history by Robert E. Ficken
Island Year by Hazel Heckman
Native Seattle : histories from the crossing-over place by Coll-Peter Thrush
Seattle, now & then by Paul Dorpat
The Northwest Coast: Or, Three years' Residence in Washington Territory by James G. Swan
Doc Maynard : the man who invented Seattle by William C. Speidel
The Natural History of Puget Sound Country by Arthur R. Kruckeberg
The Good Rain: Across Time and Terrain in the Pacific Northwest by Timothy Egan
Whistlepunks & Geoducks : Oral Histories From the Pacific Northwest by Ron Strickland
Rains All the Time: A Connoisseur's History of Weather in the Pacific Northwest by David Laskin
The American Northwest: A History of Oregon and Washington by Gordon B. Dodds
Railroad signatures across the Pacific Northwest by Carlos A. Schwantes
The Canoe and the Saddle; or, Klalam and Klickatat by Theodore Winthrop
Oysterville : roads to grandpa's village by Willard R. Espy
The Measure of a Mountain: Beauty and Terror on Mount Rainier by Bruce Barcott
The Collector : David Douglas and the Natural History of the Northwest by Jack Nisbet
Historical atlas of the Pacific Northwest : maps of exploration and discovery : British Columbia, Washington, Oregon, Alaska, Yukon by Derek Hayes
Washington Territory by Robert E. Ficken
The dry years : prohibition and social change in Washington by Norman H. Clark
The final forest : the battle for the last great trees of the Pacific Northwest by William Dietrich
Fewer