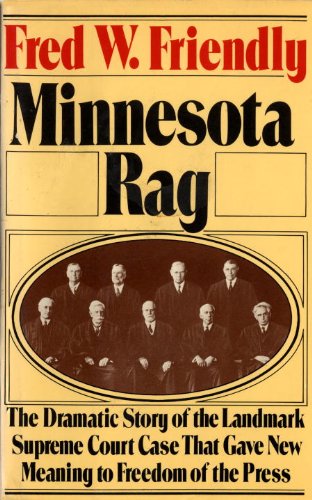 Minnesota rag : The dramatic story of the landmark Supreme Court case that gave new meaning to freedom of the press

"An informative and entertaining account of the variously comic, sordid, scandalous and high-minded doings that culminated in Near v. Minnesota, a landmark case in the history of freedom of the press." -- The New Yorker In 1927 the publisher Jay M. Near -- whose muck-raking newspaper indulged his anti-Semitic, anti-black, anti-Catholic and anti-labor prejudices -- was put out of business by a Minnesota gag law. This law allowed a single judge to bar publication of any newspaper found "malicious, scandalous or defamatory," set a dangerous precedent for prior restraint and curtailed freedom of the press. Near's case was eventually taken up by Colonel McCormick, the powerful publisher of the Chicago Tribune, who paid for the appeal to the Supreme Court. In 1931 Near v. Minnesota was decided 5 to 4 in Near's favor -- a decision that bears directly on freedom of the press today. "Ranging from the sleaze of the Minnesota underworld to the often bitchy byplay among members of the Supreme Court, [Friendly] has done a marvelous job." -- The Los Angeles Times Book Review "A very rich slice of Americana....The author creates a dramatic atmosphere and a pace that never flags." -- The New York Times… (more)

The first casualty : from the Crimea to Vietnam : the war correspondent as hero, propagandist, and myth maker by Phillip Knightley