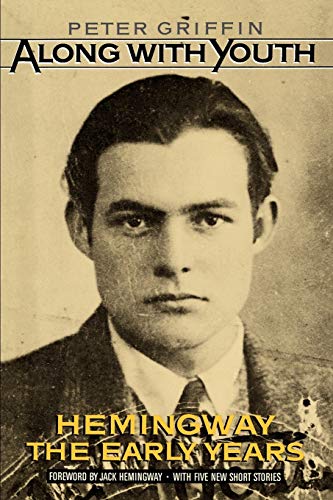 Along with youth : Hemingway, the early years

In this compelling biography, Peter Griffin draws on a wealth of previously unpublished material--including numerous letters and five of Hemingway's early short stories that appear in their entirety--to trace the formative years of one of America's most celebrated and influential authors. Along with Youth examines in richer detail than any previous account Hemingway's midwestern childhood, his relations with his parents, his journalistic apprenticeship, and his experiences as a Red Cross volunteer in Italy during World War I. It sheds new light on his wartime romance with Agnes von Kurowsky, his first love (and a model for the character of Catherine Barkley in A Farewell to Arms), as well as on the circumstances surrounding his wounding and convalescence. It closes with Hemingway on the brink of the literary career that would bring him worldwide fame. The five short stories--"The Mercenaries," "Crossroads," "Portrait of an Idealist in Love," "The Ash Heel's Tendon," and "The Current"--reveal that the Hemingway vision and style preceded the 1920s, his Paris years with Ezra Pound and Gertrude Stein. The book also contains many other newly uncovered documents--including letters written by Ernest to his closest friend, Bill Horne, before and after the Kurowsky love affair--which provide a rich new perspective on Hemingway's emotional development and his beginnings as a writer. Jack Hemingway, Ernest's son by his first wife, Hadley Richardson, made his mother's complete correspondence available to Griffin and also contributed a foreword in which he writes, "[Griffin] has shown me insights into my own father's character and behavior I would not have thought possible in view of the time lapse between Hemingway's death and the research he accomplished." This is the first installment of a projected three-volume life which promises to be the definitive Hemingway biography for this generation.… (more)

Less than a treason : Hemingway in Paris by Peter Griffin
Hemingway : a life without consequences by James R. Mellow
Walks in Hemingway's Paris: a guide to Paris for the literary traveler by Nol︠ R. Fitch