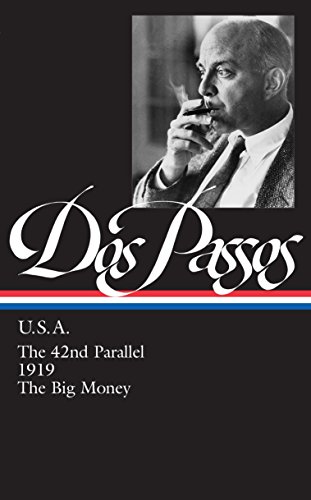 New York : Library of America ; Distributed to the trade in the U.S. by Penguin Books, c1996

Unique among American novels for its epic scope and panoramic and social sweep, John Dos Passos' U.S.A. has long been acknowledged as a monument of modern fiction. In the novels that make up the trilogy - The 42nd Parallel (1930), 1919 (1932), and The Big Money (1936) - Dos Passos creates an unforgettable collective portrait of America, shot through with sardonic comedy and brilliant social observation. He interweaves the careers of his characters and the events of their time with a narrative verve and breathtaking technical skill that make U.S.A. among the most compulsively readable of modern classics. In his prologue Dos Passos writes: "U.S.A. is the slice of a continent. U.S.A. is a group of holding companies, some aggregations of trade unions, a set of laws bound in calf, a radio network, a chain of moving picture theatres, a column of stock quotations rubbed out and written in by a Western Union boy on a blackboard, a public library full of old newspapers and dogeared history books with protests scrawled on the margins in pencil...But mostly U.S.A. is the speech of the people." The trilogy is filled with American speech: labor radicals and advertising executives, sailors and stenographers, interior decorators and movie stars. The volume contains newly researched chronologies of Dos Passos' life and of world events cited in U.S.A., notes, and an essay on textual selection.… (more)

LibraryThing member cogitno
I am generally not attracted to experimental literature; form tends to overpower characterisation and plot. Nor am I attracted to this period of literature as it is simultaneously historical and contemporary, and my powers of discrimination are inadequate to the task of a taking up a rational readers perspective. The USA trilogy is the exception. It is throws up a discordant stream of images of the (then) contemporary world, but offers neither judgement nor revelation. I don't hold with the common view that it is written from a leftist perspective, or from any political perspective at all. The subject matter is the stuff of the newspaper headlines of the day, and John Dos Passos has simply humanised these headlines.

The USA Trilogy has often been described as a "put-downable" book. And while I didn't find it so, it is better to be forewarned than disappointed. Sample it before you buy.

I consider it one of the Great books of the 20th Century. An almost forgotten masterpiece, and I wish it had been one of my countrymen who had written it.… (more)
6 more
LibraryThing member Schmerguls
I read this book in the summer of 1949 and occasionally commented on my reading: On July 3 I said I found the book reekingly exposing of the dreadful mediocrity seemingly so intimate a concomitant of America in this century. On Aug 6 I said I found the style of the book a queer one and that I've never seen the like. His camera eyes are more or less unintelligble to me. Story is panoramic and rambling but I enjoy it, though a person forgets it as it is so jumbledly. On Aug 7 I said I was finding the book eminently readable. On Aug 10 I said I love the style of the book since it is so matter-of-fact and thinking-seeming. Story, however, is lacking. On August 14 I said the book is just too long, and without any intensive plot it almost gets boring at times and the camera eye is till just words to me; and new characters keep coming in. I finished reading it on Aug 17 and said it took over two weeks to read, but of course it had 1447 pages. I don't know, the book was too disjointed to be read in snatches as I read it. I doubt I got all out of it that I should have. But it did rouse in me old fires of radicalism and led me to say I am a firm advocate of native, virile radicaalism. The style of the book kept it from being overwhelming. The book reeks with expose of all the rottenness and contempt-inspring conventions of capitalist America. The book had a real dry bite to it.
Some years later when I was picking the best book read in 1949 I chose it as such. I don't think I re-read my diary entries about the book when I made that selection. Looking at the books I read that year, I think now The Grapes of Wrath was a more memorable book..Is that cause I've seen the movie?… (more)
LibraryThing member RandyStafford
My reaction to reading the trilogy in 1997. Spoilers may follow.

I read this trilogy to get some appreciation of the style so successfully used by science fiction writersJohn Brunner and Joe Haldeman, and I found that style interesting. I liked the Camera Eye sections – impressionistic vignettes sometimes told from the point of view of some of the characters and sometimes they seem to feature viewpoint characters never seen elsewhere in the trilogy. The Newsreel sections were compelling, and the very best thing about the trilogy is a series of biographies of historical personages. Told in a variety of styles, a variety of tones, they sometimes approach prose-poems and are always interesting and very revealing in the large and small details of the people’s lives (cultural, political, scientific, and business figures).

These techniques, together with straight fictional prose, create, as they do in sf novels, a definite sense of place and time – here America in the first approximately 25 years of the 20th Century. Unfortunately, while this book evokes a time and place, it doesn’t work as drama. Many of the characters blurred together in my mind. All were on the make – at least in The Big Money. Unplanned pregnancies play a major part in the plot (as they probably did in the real lives of people during the time of this trilogy since artificial contraception was often illegal) and, for that reason, I probably confused the female characters more often than the male, but all the characters suffered from lack of memorable distinctions.

However, I’m glad I read this book to examine Dos Passos’ wonderful, groundbreaking, influential style and the history I learned.… (more)
LibraryThing member AsYouKnow_Bob
Daniel Aaron and Townsend Ludington - the scholars responsible for this edition - are great big poopieheads.

They decided that Dos Passos' typographic design could be ignored - and therefore the old Signet paperbacks are still more reliable editions than their new 'definitive' Library of America version. Idiots.… (more)
LibraryThing member lriley
Having only just finished 'The 42nd parallel' I'll comment on '1919' and 'The Big Money' when and as I get to them as I expect to move into the next as I really liked the first book of this trilogy a lot. 'The 42nd parallel would probably rate as a 4 to 4 and a half. There's a kind of looseness in Dos Passos's prose but he finds ways of tying things in to each other. The book covers a space in time in American life roughly from the beginning of the 20th century until American entry into World War 1. He develops several characters from various social strata and moves them around upwards and downwards through the fabric of society. We see them in small towns, in rural settings and large cities--their varying ambitions and the kinds of friendships they make and cast off. The social biases--the struggle of the laboring classes--the beginnings of new marketing and advertising ideas--their cynicism and sometimes relative innocence. Anyway Dos Passos's writing tends towards fluidity sometimes almost stream of consciousness. I found it engaging and liked how he separated his main chapters with newspaper clippings often in a cut and paste style--which I'm sure was most unusual for 1930 when the 42nd parallel was first published. I liked the short biographies as well of famous american public figures of those times. In a sense he is going after something much bigger than a novel--is almost trying to create a picture (or a consciousness) of those times in the minds of his readers.… (more)
LibraryThing member DeeringPublicLibrary
The U.S.A. trilogy is a major work of American writer John Dos Passos, comprising the novels The 42nd Parallel (1930); 1919, (1932); and The Big Money (1936). The three books were first published together in a single volume titled U.S.A. by Harcourt Brace in January, 1938. Dos Passos had added a prologue with the title "U.S.A." to The Modern Library edition of The 42nd Parallel published the previous November, and the same plates were used by Harcourt Brace for the trilogy.[1] Houghton Mifflin issued two boxed three-volume sets in 1946 with color endpapers and illustrations by Reginald Marsh.[2] The first illustrated edition was limited to 365 copies, 350 signed by both Dos Passos and Marsh,[3] in a deluxe binding with leather labels and beveled boards.[4] The binding for the larger 1946 trade issue was tan buckram with red spine lettering and the trilogy designation "U.S.A." printed in red over a blue rectangle on both the spine and front cover.[5] This illustrated edition was reprinted in various bindings[4] until the Library of America edition appeared in 1996, 100 years after Dos Passos' birth.[5]

In 1998, the Modern Library ranked U.S.A. Trilogy 23rd on its list of the 100 best English-language novels of the 20th century.… (more)
LibraryThing member antiquary
I have only dipped into it. The bits I've read are vividly written but depressing realistic fiction interwoven with quotations from contemporary news.
Fewer