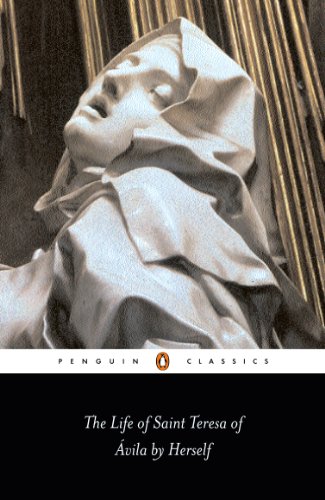 The life of Saint Teresa of Avila by herself

"She was the last person anyone would have expected to become a nun, yet she became one of the most celebrated nuns of all time. She was a brilliant administrator in a world where such vocations were all but closed to women. And above all, she combined an astonishing proclivity for ecstatic union with God with down-to-earth practicality and good humor. Teresa of Avila (1515-1582) is one of the most beloved of the Catholic saints. Her texts of spiritual instruction, such as The Interior Castle and The Way of Perfection, speak so plainly and eloquently about the interior life that they have become undisputed classics, studied by people of many faiths. In 1562, during the era of the Spanish Inquisition, Teresa sat down to write an account of the mystical experiences for which she had become famous. The result was this book, one of the great classics of spiritual autobiography." "With this translation of The Book of My Life, Mirabai Starr brings the Spanish mystic to life for a new generation, with contemporary English that mirrors Teresa's own earthy, vernacular Spanish, and that presents us with - four centuries after Teresa's death - someone we feel we know: a woman intoxicated with love for God yet filled with an overflowing love for the world."--BOOK JACKET.… (more)

LibraryThing member mahallett
i don't believe in god so it's hard to take this seriously. did she go into unreality because she was lightheaded from anorexia?