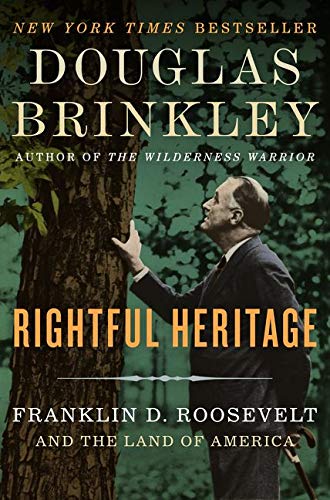 Rightful heritage : Franklin D. Roosevelt and the land of America

Douglas Brinkley's Wilderness Warrior celebrated Theodore Roosevelt's spirit of outdoor exploration and bold vision. Now Brinkley turns his attention to another indefatigable environmental leader--Theodore's distant cousin Franklin Delano Roosevelt--chronicling his essential yet undersung legacy as the founder of the Civilian Conservation Corps (CCC) and the premier protector of America's public lands. FDR built state park systems and scenic roadways from scratch. Through his leadership, pristine landscapes such as the Great Smokies, the Everglades, Joshua Tree, the Olympics, Big Bend, and the Channel Islands were forever saved. Brinkley traces FDR's love for the natural world back to his youth spent exploring the Hudson River Valley and birdwatching. Forestry would soon become a consuming passion. As America's president from 1933 to 1945, Roosevelt, a consummate political strategist, established hundreds of federal migratory bird refuges and spearheaded the modern movement to protect endangered species. He deftly positioned his conservation goals as economic policy to combat the severe unemployment of the Great Depression. During its seven-year existence, the CCC put nearly three million young men to work on conservation projects--including planting trees, national park preservation, pollution control, and grasslands restoration. Rightful Heritage is an epic chronicle that is both an irresistible portrait of FDR's unrivaled passion and drive and an indispensable analysis that skillfully illuminates the tension between business and nature--exploiting our natural resources and conserving them. Within the narrative are capsule biographies of such environmental warriors as Eleanor Roosevelt, Harold Ickes, and Aldo Leopold.--Adapted from dust jacket.… (more)

LibraryThing member banjo123
This is the third in Brinkley's National Park's series, and concentrates on conservation and environmental history during FDR's administration. I like this series, because you read about historical events (such as Yalta) from a different prospective; that of the role of politics in protecting, or destroying, our natural resources. In the case of FDR, there was some of both. He loved the outdoors, was very informed, especially about forestry, and really wanted to protect the environment for future generations. Thank you, FDR, for the Olympics. And he established the CCC, which did a lot of good. Some of what he did expanded access to wild areas for Americans, and that is a double edge sword -- good for people, and probably increases people's commitment to saving wild places,m but not always so good for plants and animals. And then, FDR's administration was big on dams. And the CCC planted Kudzu in Georgia.

I enjoy Brinkley's writing. He does tend to give a lot of facts, which sometimes is at odds with a directed narrative. I am OK with that, especially as the facts tend to be interesting, and his prose easy to read.… (more)
2 more
LibraryThing member Schmerguls
5394. Rightful Heritage Franklin D. Roosevelt and the Land of America, by Douglas Brinkley (read 2 Aug 2016) This is a carefully researched work detailing with FDR' s great interest in trees and conservation, and all he effort he did in regard to such when he was Governor of New York and President . It is very complimentary of his work in establishing the CCC and seeking to preserve natural and historic sites. I admit it told me a little more than I was interested in but it is probably the definitive work on its subject.… (more)
LibraryThing member gregdehler
What really struck me is how interconnected FDR's travel was to his conservation agenda. he traveled frequently and it seems that every time he returned from a trip, he had a new proposal to protect that area.
Fewer

Inscribed to Folio by the author