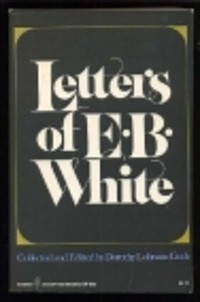 Letters of E. B. White

Originally edited by Dorothy Lobrano Guth, and revised and updated by Martha White. With a foreword by John Updike. These letters are, of course, beautifully written but above all personal, precise, and honest. They evoke E.B. White's life in New York and in Maine at every stage of his life. They are full of memorable characters: White's family, the New Yorker staff and contributors, literary types and show business people, farmers from Maine and sophisticates from New York-Katherine S. White, Harold Ross, James Thurber, Alexander Woolcott, Groucho Marx, John Updike, and many, many more. Each decade has its own look and taste and feel. Places, too-from Belgrade (Maine) to Turtle Bay (NYC) to the S.S. Buford, Alaska-bound in 1923-are brought to life in White's descriptions. There is no other book of letters to compare with this; it is a book to treasure and savor at one's leisure. As White wrote in this book, "A man who publishes his letters becomes nudist--nothing shields him from the world's gaze except his bare skin....a man who has written a letter is stuck with it for all time."… (more)