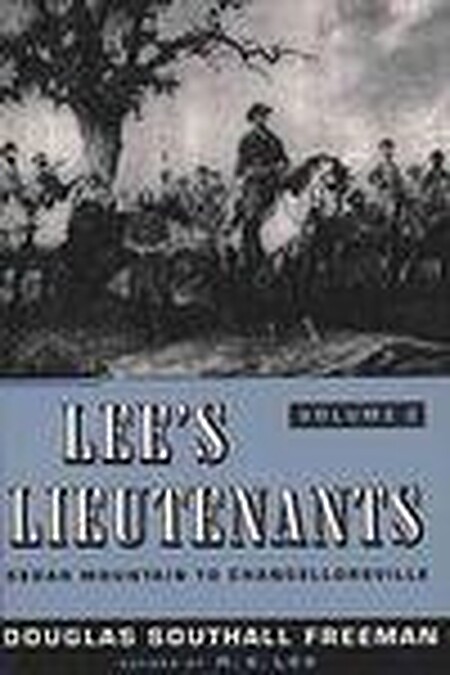 Lee's lieutenants, a study in command: Cedar Mountain to Chancellorsville

An unquestioned masterpiece of the historian's art, and a towering landmark in the literature of the American Civil War. Volume one of this magnificent three-volume narrative closed with the Confederate reorganization that followed the Seven Days' battles. In volume two, Cedar Mountain to Chancellorsville, Douglas Southall Freeman recounts the succession of battles that are among the most celebrated in the history of American warfare. The Confederacy won resounding victories in 1862-63, but they were seldom won easily or at light cost. Death was always on the heels of fame, but the men who survived -- among them Jackson, Longstreet, and Ewell -- would continue to develop as commanders and as men. In these chapters, a new type of officer arises. He is still learning, still rounding to the full stature of a leader, and combat is still his glory. At second Manassas he is John Hood; at South Mountain he is Robert Rodes; at Sharpsburg he is John Cook, and at Chancellorsville there is a goodly fellowship: Rodes and Ramseur and Pender and Wilcox. But it is Jackson who is the central figure in this volume. The history of the Confederate Army from Cedar Mountain to Sharpsburg and back again to the Rappahannock is, in its finest lines, his military biography. By the spring of 1863, "Old Jack" personifies the mobility, the resolution, and the offensive daring of the Army, and his death is a defeat that cancels all the gains at Chancellorsville.… (more)

Lee's lieutenants, a study in command; Gettysburg to Appomattox by Douglas Southall Freeman
Gettysburg--Culp's Hill and Cemetery Hill by Harry W. Pfanz
Landscape turned red : the Battle of Antietam by Stephen W. Sears
Gettysburg, the second day by Harry W. Pfanz
Chancellorsville, 1863: The Souls of the Brave by Ernest B. Furgurson