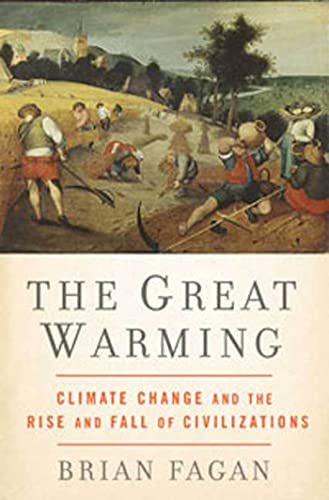 The Great Warming: Climate Change and the Rise and Fall of Civilizations

From the 10th to the 15th centuries the earth experienced a rise in surface temperature that changed climate worldwide--a preview of today's global warming. In some areas, including Western Europe, longer summers brought bountiful harvests and population growth that led to cultural flowering. In the Arctic, Inuit and Norse sailors made cultural connections across thousands of miles as they traded precious iron goods. Polynesian sailors, riding new wind patterns, were able to settle the remotest islands on earth. But in many parts of the world, the warm centuries brought drought and famine. Elaborate societies in western and Central America collapsed, and the vast building complexes of Chaco Canyon and the Mayan Yucatan were left empty. Anthropologist and historian Brian Fagan reveals how subtle changes in the environment had far-reaching effects on human life, in a narrative that sweeps from the Arctic ice cap to the Sahara to the Indian Ocean.--From publisher description.… (more)

LibraryThing member reginaromsey
This book concentrates more on the Americas, China, and the Pacific than does "The Little Ice Age" that comes after it. I became interested in Climate and history because I am so constantly irritated by open mouthed awe that blames EVERYTHING from Low dresses to high dresses to whatever on the Little Ice Age, so I bought that book. Then I saw this one in the If you like this you might like these on Amazon.
Opened up a whole new way of seeing European history and particularly English which is what I am interested in.… (more)
2 more
LibraryThing member drneutron
The Great Warming describes the effect of the period known as the Great Medieval Warming on weather patterns around the world. These changes in climate affected nearly every culture around the world, some in positive ways, but mostly in negative ways. Fagan uses nontechnical prose to discuss these cultural impacts, but manages to convey the depth of recent research in understanding the effects of climate shifts on humans.

Fagan clearly expresses recent ideas and results, but can be a little repetitive at times. This and his lack of depth in discussing research methods are my only complaints about the book. In spite of this, the work was well worth the time spent, and I plan to pick up others Fagan has written - such as The Little Ice Age.… (more)
LibraryThing member evanroskos
A fascinating look at the Medieval Warming period that includes not only Europe, but just about every part of the world. Fagan presents various examples of how the warming period (which was not a consistent warmth, but a period of cyclical warmth resulting from, among a few things, El Nino/La Nina changes.) The resulting analysis is convincing if not a bit repetative, since most of the areas he describes (Mexico, Peru/Chile, Africa, India & China) all suffer from droughts while Europe and Northern North America flourish (or at least benefit, as in the case of the Norsemen and Inuits who ended up trading with one another).

Mixed in with his clearly presented info on climatology is historical information, all backed by Fagan's years and years of research. He does not limit his focus to just weather or just archeology. He blends many factors together to form his final argument.

Which is essentially that we are fucked if all we do is worry about temperature and not drought.

One thing that did nothing for me was Fagan's attempt, at the start of every chapter, to set the scene. Ultimately, each piece is awash in vagaries and simply sets up a general idea of key features of the civilization/tribe/culture that is about to be discussed. I guess it's an attempt to "liven things up" that I didn't need but others might appreciate. Since I only read 1-2 non-fiction books a year, I was more interested in the analyses.

Field notes from a catastrophe : man, nature, and climate change by Elizabeth Kolbert
Before the Dawn: Recovering the Lost History of Our Ancestors by Nicholas Wade
Mapping human history : discovering the past through our genes by Steve Olson