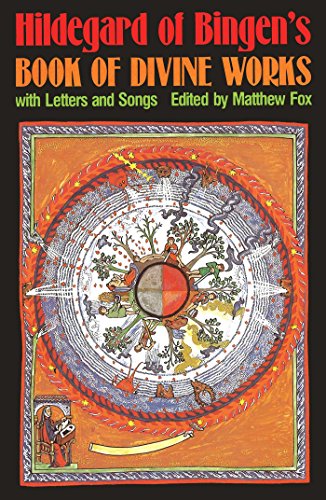 Hildegard of Bingen's book of divine works with letters and songs

Hildegard of Bingen, a Rhineland mystic of the twelfth century, has been called an ideal model of the liberated woman. She was a poet and scientist, painter and musician, healer and abbess, playwright, prophet, preacher and social critic. The Book of Divine Works was written between 1170 and 1173, and this is its first appearance in English. The third volume of a trilogy which includes Scivias, published by Bear & Company in 1985, this visionary work is a signal resounding throughout the planet that a time of healing and balance is at hand. The Book of Divine Works is a cosmology which reunites religion, science, and art, and readers will discover an astonishing symbiosis with contemporary physics in these 800-year-old visions. The present volume also contains 51 letters written by Hildegard to significant political and religious figures of her day and translations of twelve of her songs.… (more)

LibraryThing member Donovan
To my knowledge, this is the only English translation of this spectacular work of Mystical writing. Furthermore, I believe that it is out of print. Hildegard writes on the practice of meditation for the purpose of mystical attainment, and this forms the book's main subject. Hildegard's practice of meditation consists of developing certain images in one's soul (or mind, if you prefer not to be so mystical about it). Provided in this edition are drawings which accurately reproduce the images Hildegard originally either developed, or saw, in her mystical visions. She included such drawings in the original manuscript of the Book of Divine Works, although in the only surviving copy of the text (which this volume was translated from) was done according to Hildegard's supervision, not by her hand.
Hildegard's writing is an eloquent and beautiful exposition of christian mysticism in the 11th century. Her intent in writing this work was in part to increase the practice of meditation for the purpose of mystical attainment, and in many ways it reads as a guide for the person who wants to 'see' god; a 'how to be a mystic' tract. This is quite different from Theresa of Avila's intent in her autobiography, in which she discusses mystical practice in terms of personal journeys and experiences as a mystic.
Hildegard is also an interesting figure in Christian (church) history: she comes not too long before Galileo and might have offered Catholicism something that some of those involved in the reformation would have sought. She was a powerful woman leader as an Abbess, and wrote letters (some of which are included by Fox here) to some of the most powerful people in the world, which usually well-received. The Catholic Church had a tenuous interaction with Hildegard however, as evidenced by her non-attainment of sainthood and the reversal (unwilling reversal, no doubt) of a decision to remove her from her position as abbess.… (more)