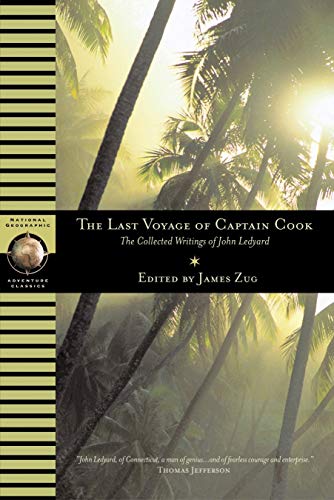 The Last Voyage of Captain Cook : The collected writings of John Ledyard

"Meet John Ledyard, perhaps the greatest little-known explorer in American history. Ledyard (1751-1789) sailed with Capt. James Cook, formed a fur trading company with John Paul Jones, and dreamed, with Thomas Jefferson, of walking across the United States 20 years before Lewis and Clark set off on their famous expedition. Ledyard's journals, letters, and one published book, collected for the first time in one volume, showcase the uncontainable wanderlust of a unique American spirit. A Journal of Captain Cook's Last Voyage is the only account of Cook's third voyage to be published by an American. It is a record of life aboard the first ship to sail to the Hawaiian islands and Cook's violent death on a Hawaiian beach. Ledyard's Siberian journals recount a harrowing journey through Russia under the rule of Catherine the Great, while his diary from Alexandria and Cairo provides a brilliant and rare account of Egypt before Napoleon's invasion. Finally, Ledyard's correspondence sheds light on pre-revolutionary Paris and on his friendships with the Marquis de Lafayette, Benjamin Franklin, and Sir Joseph Banks. In his short life, John Ledyard traveled farther than any American had before."--BOOK JACKET.… (more)

LibraryThing member xenchu
This book is composed of the journals and letters of John Ledyard, American explorer, circa 1779-1788. He accompanied Captain Cook on his third and last voyage as a Corporal of Marines, the only man aboard not an officer to keep a journal of the voyage. I think this gave him a unique perspective on happenings although he was not privy to command decisions.

Besides being a very tough man he was singularly unprejudiced for the times. He felt that Captain Cook created the circumstances that led to his killing. He believed that men were of different colors due to natural causes, that all men were of one family and the Russian Tartars and American Indians were related. He saw the native peoples he met as fairly and clearly as anyone could have at the time. He did not denigrate them or consider them inferior. He was remarkably clear-sighted for the time in which he lived.

After his voyage with Cook he attempted to cross Russia with the intention of traveling on to cross North America. If he had not been stopped by Catherine the Great it is possible that he would have made the trip and could have changed the course of history.

John Ledyard was an educated man and for the most part his journals are very readable. He was never able to edit the journals so there are syntax and grammar problems but they are not too serious. The end notes are very useful, however. I can recommend the book as a fascinating look at the explorations of a man now almost completely unknown.… (more)

Captain James Cook by Richard Hough
Ghosts of Cape Sabine : the harrowing true story of the Greely Expedition by Leonard F. Guttridge
The Bounty : the true story of the mutiny on the Bounty by Caroline Alexander
Fatal passage : the untold story of John Rae, the Arctic adventurer who discovered the fate of Franklin by Kenneth McGoogan