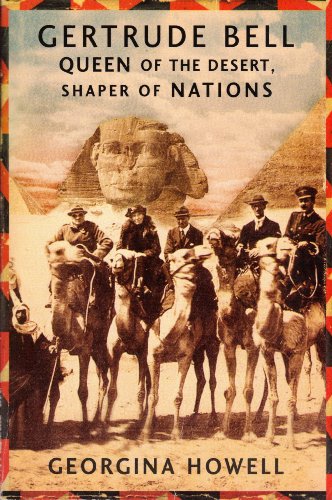 Gertrude Bell: Queen of the Desert, Shaper of Nations

She has been called the female Lawrence of Arabia, which, while not inaccurate, fails to give Gertrude Bell her due. She was at one time the most powerful woman in the British Empire: a nation builder, the driving force behind the creation of modern-day Iraq. Born into privilege in 1868, Bell turned her back on Victorian society, choosing to read history at Oxford and going on to become an archaeologist, spy, Arabist, linguist, author, poet, photographer, and mountaineer. She traveled the globe several times, but her passion was the desert--her vast knowledge of the region made her indispensable to the British government during World War I. As an army major on the front lines in Mesopotamia, she supported the creation of an autonomous Arab nation for Iraq, promoting and manipulating the election of King Faisal to the throne and helping to draw the borders of the fledgling state.--From publisher description.… (more)

LibraryThing member SamanthaMarie
An amazing story about a truly incredible woman. Best known as an integral player in the founding of Iraq, she was so much more than that. She was a daring and talented amateur mountain climber whose climbs are still revered today. She implemented a system to keep track of missing, dead and wounded soldiers in WWI which included enlisted men for the first time ever. She had two tragic loves in her life but never married. She walked right into a man's world and made them take notice of her for her brilliant mind and political acumen in a day and age when women were supposed to sit at home with the children.
The story about this truly amazing woman reads like fiction. It also gives an interesting perspective on Iraq, the Middle East and British colonialism.… (more)
13 more
LibraryThing member jmcilree
Rich English girl spends her father's money dillying in archeology in Turkey and winds up taking truly remarkable journeys in Turkey controlled Arabia, Palestine and Mesopotamia, pre WWI.

Her knowledge of the area and people puts her in the pole position to help foment the Arab revolt against Turkey with the goal of opening a second front against the Germans and post the war as a lead advisor on the creation of Iraq.

Besides the annoying habit of apologizing for all of Gertrude's bad behavior and too much speculation about relatively minor points (Did Gertrude board a boat and go visit her dead lover's grave near Gallipoli??!!??), what irritated me most was the lack of discussion of how the founding of Iraq may have had some impact on the current state of Iraq. But I came away with little insight.

In 1899 she did her first serious climb (the13.000 foot Meije in the Alps) and was already a well known climber when in 1902 she attempted the difficult and unclimbed north-east face of the Finsteraarhorn, the highest mountain in the Swiss Oberland. She and her two guides barely survived when they were caught on the mountain overnight in heavy ice storm but despite it's final failure it was recognised as a great Alpine expedition.

In 1914 she was in the Arabian desert and an accomplished Middle East traveller when she arrived at the remote fortress of Hayyil, then under the control of the Rashid family. She was one of the rare Westerners to visit the town and speaking Arabic was in a special place at a time of rapid change.

The First World War was to see the crumbling of the old Hapsburg and Ottoman empires and the beginning of the end of the British empire. The Rashids were the Arab allies of the Ottoman Turks and thereby Germany. Arabia was polarising between the old Ottoman influence, fundamental Islamic Wahabism represented by Ibn Saud and Arab nationalism around the Hashemites.

Her sympathies lay with the Arab nationalists although the British government was to keep contact with both Ibn Saud and the Hashemites with a view to their usefulness and envisaging an Imperial Indian type administration after the defeat of the Turks.

The generals of the British Indian Expeditionary Force who were leading the war in southern Iraq were surprised and impressed with Gertrude Bell's knowledge of the Arabs and she was given a military post as their political adviser.

However, from the start, they were pulling in different directions. Like T.E.Lawrence (Lawrence of Arabia) she was a great romantic about the East, with her translations of Persian poetry, delight in Arab tradition and somewhat unquestioning support of Arab nationalism. The Hashemites and their victorious leader Amir Faisal liked and respected her but the British government were doubtful about a chaotic "Arab Revolt".
Not one to hide her views, she clashed with her superior Sir Arnold Wilson, the Civil Commissioner of Iraq and attempted to circumvent him by preparing a Draft Constitution for the country and sending it with her opinions to Edwin Montagu, the Secretary of State for India.

Georgina Howell shows how stubborn Gertrude Bell could be and while clearly sympathising with her, the facts speak for themselves and the reader can see a very opinionated, "know it all" sort of woman who was ready from a young age to force her half thought out views onto others in the interests of creating a stir (that brilliant girl again).

There was some reality lacking here and one of her translations of the start of a Persian poem quoted in the book perhaps gives a clue to it:

A more literal translation is given as;

I will not hold back from seeking until my desire is realised,
Either my soul will reach the beloved, or my soul will leave it's body,
I cannot always be taking new friends like the faithless ones,
I am at her threshold until my soul leaves it's body.

She translates this as;

I cease not from desire until my desire
Is satisfied; or let my mouth attain
My love's red mouth, or let my soul expire
Sighed from those lips that sought her lips in vain.
Others may find another love as fair;
Upon her threshold I have laid my head...

She built epic emotions out of her own scraps of relationships, remaining a virgin to the end of her life but falling wildly in love with a married British officer, Charles Doughty-Wylie leaving him rather embarrassed and regretting the whole thing as Gertrude (and his wife) threaten suicide.

The British went on to capture Kurdish northern Iraq, occupying Mosul, and trying to hold together with inadequate resources a country divided between Sunnis, Shias and Kurds as the years dragged on from 1917 until the Paris Peace Conference of 1920. Faisal became king of Iraq, having been rejected by the French occupiers of Syria and carried the flag of Arab nationalism mostly in his own family's interest but finally losing Mecca, his ancestral birthplace to the Saudis and the future Saudi Arabia.

Gertrude Bell no longer had an active role to play and with little money and lonely she committed suicide in 1926.… (more)
LibraryThing member Eye_Gee
I wanted to know more about how the middle east was carved up after WWI, and this book told part of the story. d
LibraryThing member eglinton
Energetic life of the remarkable Bell, avidly trekking through the lands of Arabia, ticking off high Alpine peaks as a mountaineering pioneer, midwifing the state of Iraq after the Ottoman collapse as confidante of King Faisal, assembling antiquities from the ancient civilisations of Mesopotamia. All without neglecting her own emotional life, all well conveyed in her spirited letters.… (more)
LibraryThing member RealLifeReading
And that then is my reason for connecting this review with that of Gertrude Bell’s biography. For indeed, how do you begin a biography? Especially with a woman who has lived such a life? A woman who once used to be more famous than T.E. Lawrence (who was a good friend actually), who travelled the Middle East, at a time when women rode side saddle (she had an apron sort of garment made to cover her pants), who climbed mountains (taking off her skirt to do so!), who was daring and brave and adventurous – at a time when women tended to keep to the home.

“Constrained and compartmentalised at home, in the East Gertrude became her own person.”

Howell does a great job piecing together her life, from letters, from other accounts of her, from the many works Bell wrote, essentially to figure out:

“By what evolution did a female descendent of Cumbrian sheep farmers become, in her time, the most influential figure in the Middle East?”

A gung-ho spirit, a fierce determination, wit and charm helps. As does knowing the right people! If you’re in the mood for a biography, may I suggest this one. Gertrude Bell, she astounds me.
… (more)
LibraryThing member nx74defiant
I really enjoyed this book. I didn't really know anything about Gertrude Bell before I read this book. She was a fascinating woman. She traveled alone across Arabia. In many ways she was a head of her time. Yet, in many ways she was a product of her time. She would not marry when her father refused to give her permission. She was an independent women yet she was against giving women the right to vote.… (more)
LibraryThing member nandadevi
It was - remarkable. Apart from being an inspiring story of a woman who eschewed the constraints of a male dominated political and social scene, this is the inside story of the creation of the nation of Irag, and the sorry tale of early western involvement in Middle Eastern politics. Bush and Blair and their cronies would have done better to have read this and learnt something from Bell's nuanced view of Arab politics and culture before setting out on their childish adventures - but that presupposes that they could read - which in Bush's case might be doubted. The ordinary reader, however, will be rewarded.… (more)
LibraryThing member nmele
An excellent biography with just enough context to understand her significance.
Fewer

Lawrence in Arabia: War, Deceit, Imperial Folly and the Making of the Modern Middle East by Scott Anderson
Seven pillars of wisdom : a triumph by T. E. Lawrence
The Bolter by Frances Osborne
A rage to live : a biography of Richard and Isabel Burton by Mary S. Lovell
The return of a king : the battle for Afghanistan, 1839-42 by William Dalrymple
2 more
The perfect summer : England 1911, just before the storm by Juliet Nicolson
Shadow of the Silk Road by Colin Thubron
Fewer