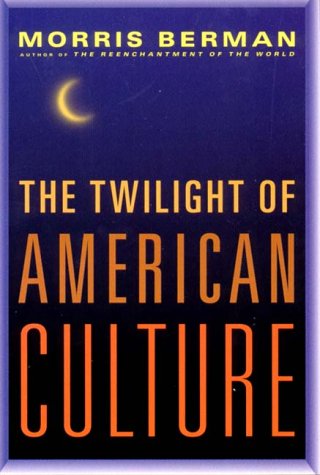 A prophetic examination of Western decline, The Twilight of American Culture provides one of the most caustic and surprising portraits of American society to date. Whether examining the corruption at the heart of modern politics, the "Rambification" of popular entertainment, or the collapse of our school systems, Morris Berman suspects that there is little we can do as a society to arrest the onset of corporate Mass Mind culture. Citing writers as diverse as de Toqueville and DeLillo, he cogently argues that cultural preservation is a matter of individual conscience, and discusses how classical learning might triumph over political correctness with the rise of a "a new monastic individual"--a person who, much like the medieval monk, is willing to retreat from conventional society in order to preserve its literary and historical treasures. "Brilliantly observant, deeply thoughtful ....lucidly argued."--Christian Science Monitor… (more)

LibraryThing member Carlie
According to Berman (and I tend to agree), American culture has entered its twilight, ready for decline and disintegration. In fact, the decline has already begun with the advent of McWorld - corporate takeover and marketed messages. There are four factors that coincide with the collapse of culture, all apparent in society today. These four factors are: "(a) accelerating social and economic inequality; (b) declining marginal returns with regard to investment in organizational solutions to socioeconomic problems; (c) rapidly dropping levels of literacy, critical understanding, and general intellectual awareness; (d) spiritual death - that is, Spengler's classicism: the emptying out of cultural content and the freezing (or repackaging) of it in formulas - kitsch, in short."

He also chronicles the fall of the Roman empire and the subsequent monastic tradition of copying texts to show how another culture ended and what the response was. Berman provides insight into how to live a monastic life and the value of living in this way for the preservation of culture. In the end, he outlines possible 22nd centuries based on alternative visions and social theories.

Really, it is all pretty bleak but not out of touch with reality. Most of what he says makes perfect sense and has the possibility of utter rage at what we have become. For me, the main message is to keep doing what I have been doing - learning, creating, teaching, discovering. These things may soon be more important for cultural preservation than ever. Living the life of a new monastic individual may have unforeseen, positive impact when culture hits its ultimate lowest. If we can't stop a bleak future, at least we can help shape it.… (more)
3 more
LibraryThing member pessoanongrata
i pretty much agree with everything he says. our culture, our politics, are cesspools of submediocrity. but all this talk about the meaningless of consumerism made me want to go out and buy some new threads. which i did.
LibraryThing member snash
The book presents clear evidence for the decline and hollowing out of America which the years' events since its publication in 1999 further prove. He finds the collapse unavoidable and then suggests the only ethical and meaningful way to live at this time is to quietly renounce the values of the culture and live according to one's own. Perhaps these counter lives will provide a beacon to a later enlightenment or not.… (more)
LibraryThing member owen1218
The only thing I took from this was that the author thinks younger people are stupid because they never learned to memorize Robert Browning poems in school, and that this was a sure sign the culture was falling into ruin. I'm sure there were some good bits in this, but they escape me now, and so couldn't have been all that brilliant.… (more)
Fewer

The age of American unreason by Susan Jacoby
Bobos in Paradise : The new upper class and how they got there by David Brooks
The Metaphysical Club: A Story of Ideas in America by Louis Menand
Habits of the Heart: Individualism and Commitment in American Life by Robert Neelly Bellah