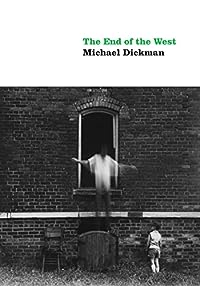 The end of the west

"Dickman's book moves with careful intensity as it confidently illuminates buried, contemporary suffering." -Publishers Weekly "Elizabeth Bishop said that the three qualities she admired most in poetry were accuracy, spontaneity, and mystery. Michael Dickman's first full-length collection of poems demonstrates each brilliantly... .These are lithe, seemingly effortless poems, poems whose strange affective power remains even after several readings. Again and again the language seems to disappear, leaving the reader with woven flashes of image, situation, emotion... .These are durable poems from one of the most accomplished and original poets to emerge in years." -The Believer "With vacant space and verbal economy, his work suggests volumes." -Poets & Writers The poems in Michael Dickman's energized debut document the bright desires and all-too-common sufferings of modern times: the churn of domestic violence, spiritual longing, drug abuse, and the impossible expectations fathers have for their sons. In a poem that references heroin and 'scary parents,' Dickman reminds us that 'Still there is a lot to pray to on earth.' Dickman is a poet to watch. You can go blind, waiting Unbelievable quiet except for their soundings Moving the sea around Unbelievable quiet inside you, as they change the face of water The only other time I felt this still was watching Leif shoot up when we were twelve Sunlight all over his face breaking the surface of something I couldn't see You can wait your whole life Michael Dickman was born and raised in Portland, Oregon, and began writing poems 'after accidentally reading a Neruda ode.' His work has appeared inThe New Yorker,Tin House, andThe American Poetry Review.… (more)

The Believer
Elizabeth Bishop said that the three qualities she admired most in poetry were accuracy, spontaneity, and mystery. Michael Dickman’s first full-length collection of poems demonstrates each brilliantly.

All-American Poem by Matthew Dickman
Flies by Michael Dickman
Selected Poems by Mary Ruefle
Fall higher by Dean Young
Where Have All the Flowers Gone: A Musical Autobiography by Pete Seeger
11 more
Steal Away: Selected and New Poems by C. D. Wright
Lighthead by Terrance Hayes
The Book of Martyrdom and Artifice : first journals and poems, 1937-1952 by Allen Ginsberg
Duende : poems by Tracy K. Smith
The Game of Boxes : [poems] by Catherine Barnett
Wild tongue by Rebecca Seiferle
Rising, falling, hovering by C. D. Wright
Half of the World in Light: New and Selected Poems by Juan Felipe Herrera
Dear Darkness: poems by Kevin Young
Elegy Owed by Bob Hicok
Sleeping it Off in Rapid City: poems, new and selected by August Kleinzahler
Fewer