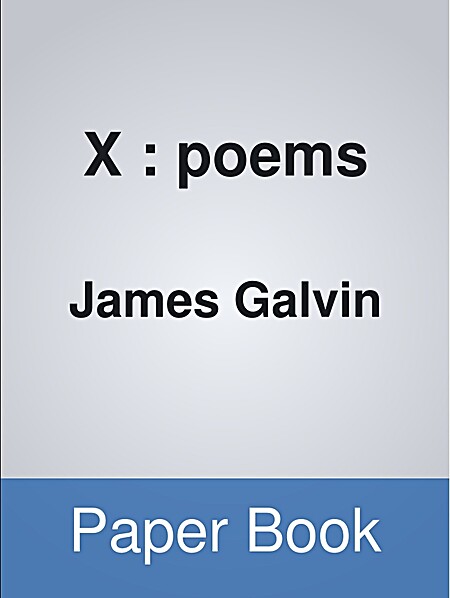 "X" is the kiss and betrayal, the embrace, the crucifixion, the mathematical unknown. In his sixth book of poems, James Galvin writes from a deep, philosophical engagement with the landscape and faces a "vertigo of solitude" with his marriage dissolved, his only daughter grown and gone, and the log house he built by hand abandoned. "What did I love that made me believe it would last?" he asks. Something has to be true enough to be Taken for granted. In the hospital I saw An old man Caressing the face of an old woman. This same man, young, caressed her face In just that way. That's the stillness At the center of change-- A sadness worth dying for, I swear-- There is no other.--from "Dying into What I've Done" "James Galvin has a voice and a world, perhaps the two most difficult things to achieve in poetry."--The Nation "In James Galvin we have a superior poet."--American Book Review "Galvin's poems have the virtues of precise observation and original language, yes, but what he also brings to the table is a rigor of mind and firmness of phrasing which make the slightest of his poems an architectural pleasure."--Harvard Review James Galvin has published five collections of poetry, most recentlyResurrection Update: Collected Poems 1975-1997, which was a finalist for the Los Angeles Times Book Award and the Lenore Marshall/The NationPrize. He is also the author of the critically acclaimed prose book,The Meadowand a novel,Fencing the Sky. He lives in Laramie, Wyoming, where he works as a rancher part of each year, and in Iowa City, where he is a member of the permanent faculty of the University of Iowa Writers' Workshop.… (more)

LibraryThing member SqueakyChu
I didn't much enjoy this book. The poetry was a bit over my head. I could feel there was a man, the poet, who was deeply saddened by the fact that his wife left him and took their little girl. There were two poems I liked reading: (1) Cherry Blossoms Blowing in Wet, Blowing Snow (2) Depending on the Wind. The others were too hard for me to understand. I don't like to struggle with poetry. I like to simply rest in its comfort.… (more)

Resurrection update : collected poems, 1975-1997 by James Galvin
Lethal frequencies by James Galvin
Delights & shadows : poems by Ted Kooser
The oldest map with the name America : new and selected poems by Lucia Maria Perillo
The Sacraments of Desire by Linda Gregg
8 more
Time and Materials: Poems 1997-2005 by Robert Hass
Never: Poems by Jorie Graham
The End of Beauty by Jorie Graham
Carolina Ghost Woods: poems by Judy Jordan
Neon Vernacular: New and Selected Poems by Yusef Komunyakaa
Break the glass by Jean Valentine
The art of the lathe : poems by B. H. Fairchild
Men in the Off Hours by Anne Carson
Fewer