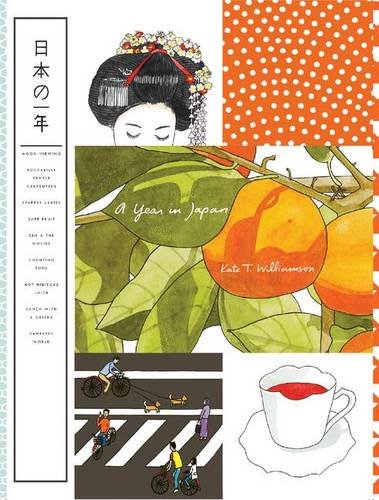 A year in Japan

The Land of the Rising Sun is shining brightly across the American cultural landscape. Recent films such as Lost in Translation and Memoirs of a Geisha seem to have made everyone an expert on Japan, even if they've never been there. But the only way for a Westerner to get to know the real Japan is to become a part of it. Kate T. Williamson did just that, spending a year experiencing, studying, and reﬂecting on her adopted home. She brings her keen observations to us in A Year in Japan, a dramatically different look at a delightfully different way of life. Avoiding the usual clichés--Japan's polite society, its unusual fashion trends, its crowded subways--Williamson focuses on some lesser-known aspects of the country and culture. In stunning watercolors and piquant texts, she explains the terms used to order various amounts of tofu, the electric rugs found in many Japanese homes, and how to distinguish a maiko from a geisha. She observes sumo wrestlers in traditional garb as they use ATMs, the wonders of "Santaful World" at a Kyoto department store, and the temple carpenters who spend each Sunday dancing to rockabilly. A Year in Japan is a colorful journey to the beauty, poetry, and quirkiness of modern Japana book not just to look at but to experience.… (more)

Southeast Review of Asian Studies
A Year in Japan is so much a visual text that many would undoubtedly classify it as an "art book." Where the book ends and the art begins is intentionally unclear. The author's own vivid watercolors and line drawings are the focal point of this visual journal, with accompanying handwritten text that itself is, perhaps not surprisingly, artistic. . . . Williamson's images and texts add a level of nuance aided by the author's keen sense of observation and detail. Shining through every narrative, as well, is the everyday nature of things. For example, in "Lunch with a Geisha," Williamson recounts having an informal lunch with the geisha Haruno-san in Kyoto. Near the end of this piece, the mundane seems rather unexpected: "After she finished her [egg] sandwich, Haruno-san lit a cigarette and took a picture of me with her cell phone." Geisha are normal people, too, Williamson seems to be saying, with a wink. This essay is preceded by a colorful, annotated differentiation between a geisha and a maiko 舞妓 (an apprentice geisha). What Williamson accomplishes on two pages with two pictures and just fourteen words is quite impressive.

LibraryThing member chibimajo
Ended up mostly just skimming this book, it was a bit of a disappointment. The illustrations to go with it were lovely, and sometimes said more than the short descriptive passages of Japanese life. It's really just a collection of short snippets of life from Japan. There's no real detail about everyday living, just bits and pieces that anime fans may or may not already know.… (more)
8 more
LibraryThing member shawjonathan
This is a beautiful book featuring elegant drawings of washcloths, fruit, street scenes, food, anything that took the author's fancy, with brief narratives or explanations in an attractive cursive font. It's a low-key art book. When she says Japan, she means Kyoto, and manages to be funny, respectful, engaged without being at all fascinated by the night life like so many male travel-writers who visit Japan.… (more)
LibraryThing member booksmitten
Kate Williamson has created not so much a linear travel narrative as a kalaidescope of stunning colors and images that she gathered throughout the year she lived in Japan. She doesn't neglect the expected cherry blossoms or sushi lunches, but she also shares with us sumo wrestlers at ATMs, elegant taxicabs, and rubber stamp stands at Shinto shrines. Simply put, this book is an extremely appealing object.… (more)
LibraryThing member ThatsFresh
The second I saw the cover of this book, I knew I had to own it. I love everything Japanese culture, and this book was right up my alley. All it took was a few seconds to flip through the colorful pages and I was sold.
A few weeks later, I had heart surgery and used this book to calm me down while I waited in the waiting rooms at the hospital prior to the operation. I have been to Japan two times before, and reading this book reminded me of the wonderful times I’ve had there, and really helped clam me with it’s beautiful watercolors.
Kate captures Japan wonderfully with all her little notes on the culture and what’s it’s like to simply walk around a Japanese town. It’s a very short read, but a great book to have in your collection, and use as coffee table book or even as decoration in an Asian-inspired room.
I'm planning on living in Japan for at least one year once I'm through with college, and reading this book makes me want to jump on a plane this instant.… (more)
LibraryThing member LibraryGirl11
An artist's sketchbook of experiences in Japan, presented in no particular order and without any kind of narrative connection beyond being a slice of Japanese life. Ok, but chauvot's Tokyo on Foot is more engaging.
LibraryThing member quondame
A book of pretty pictures, outlined in black with water color like fill. It is idiosyncratically impressionistic, and gets sparse in text in the last 3rd. The pictures don't strike me as original in any way and sometimes need to be figured out.
LibraryThing member bookbrig
Sweet and light, with charming sketches and drawings. I enjoyed the little bits of text, and just about all of them left me more curious than I was at the start. Super quick read, even if you linger over some of the art.
LibraryThing member on_elc
It's really more a collection of watercolor art with some very brief essays thrown in. The author went to study sock design in Japan for a year, and took down notes and sketches of all sorts of aspects of Japanese life. It's really a pretty little book - the art isn't perfect or photorealistic, but it's very charming. She also has pretty handwriting ♥ My favorite part is a painting of a moonlit night sky with a poem by Minamoto no Saneakira on it:

"If only I could show them to someone who knows / This moon, these flowers, this night that should not be wasted."… (more)
LibraryThing member BraveNewBks
A travelogue right up my alley--Williamson zeroes in on the kind of tiny, fascinating details that are my favorite part of exploring another culture. For instance, in the Japanese language, the words you use for numbers/amounts change depending on what is being numbered/counted. So Williamson gives us a list of the words you would use to order one, two, three, four, five, six, or seven bricks of tofu. The list stops at seven, "because no one would ever order more than that," she's told.

These charming little observations are accompanied by bright, beautiful watercolor illustrations. Some of the accompanying wording is short and brilliant enough to be poetry. This won't take you long to read, but it's a good example of "less is more" -- I felt I had more of an insight into Japan from this quick read than from my weeklong visit there a couple of years ago.… (more)
Fewer

36 views of Mount Fuji : on finding myself in Japan by Cathy N. Davidson
Japanland : a year in search of wa by Karin Müller
Learning to bow : an American teacher in a Japanese school by Bruce S. Feiler
Everything Is Its Own Reward: An All Over Coffee Collection by Paul Madonna
The Roads to Sata: A 2000-Mile Walk Through Japan by Alan Booth
3 more
Kyoto: Seven Paths to the Heart of the City by Diane Durston
Lost on planet China : the strange and true story of one man's attempt to understand the world's most mystifying nation, or how he became comfortable eating live squid by J. Maarten Troost
The Inland Sea by Donald Richie
Fewer