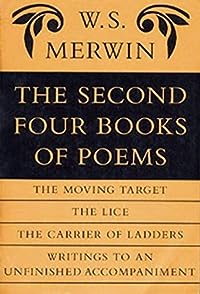 The Second Four Books of Poems

W.S. Merwin was born in New York City in 1927 and grew up in New Jersey and Pennsylvania. He worked as a tutor in France, Portugal, and Majorca, and has translated from French, Spanish, Latin and Portugese. He has published more than a dozen volumes of orignal poetry and several volumes of prose. Mr. Merwin has been awarded the Tanning Prize, the Pulitzer and Bollingen prizes, the Fellowship of the Academy of American Poets, the Shelley Memorial Award, the Pen Translation Prize, and many other honors.He lives in Haiku, Hawaii.W.S. Merwin's 'Second Four Books of Poems' includes some of the most startlingly original and influential poetry of the second half of this century, a poetry that has moved, as Richard Howard has written, "from preterition to presence to prophecy." Other books by M.S. Merwin available from Consortium: 'East Window' (Copper Canyon Press), 1-55659-091-1 'The First Four Books of Poems' (Copper Canyon Press), 1-55659-139-X 'Flower & Hand' (CopperCanyon Press), 1-55659-119-5… (more)

LibraryThing member abirdman
This is a huge and compelling book, W.S. Merwin's finest four books, from his peak years. Prodigious, this is must have on a desert island level book. Savor it, read it twice, and then read it again.