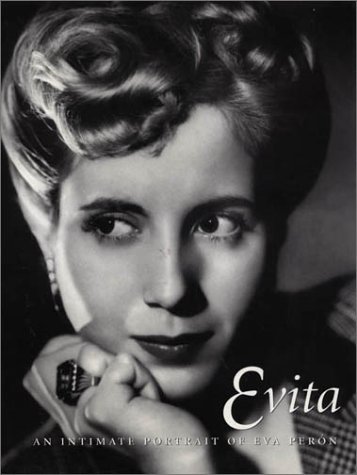 By the time of her death in 1952 at age 33, the charismatic Argentine first lady Eva PerÓn--Evita to millions of loyal followers--had become the spiritual leader of the nation, a saintlike figure whose dramatic life would inspire near mythical devotion as well as callous rumors and fierce political debate. Although she wielded privilege and power as the wife of Argentine president Juan PerÓn and was honored by heads of state and received by the Pope, Evita devoted her life to fighting for the rights of the descamisados, the "shirtless poor" and working-class people of Argentina for whom she had deep compassion. This lavish photographic chronicle documents the private and public life of Eva PerÓn, from her modest childhood in the provincial villages of the pampas to her early career as an actress in Buenos Aires, her marriage to Juan PerÓn, her crucial role in politics, and her extraordinary funeral, when millions of mourners thronged Buenos Aires to view her body, and thousands of small, flower-adorned shrines carpeted the streets. Evita's dramatic life unfolds on these pages with unprecedented immediacy, against the vivid backdrop of real places and events. These photographs--many of which have never before been published--were discovered in archives and private collections throughout the world, and include images by Alfred Eisenstaedt, GisÈle Freund, and Cornell Capa, as well as reproductions of magazine covers and publicity stills from Evita's acting career, sketches of her jewelry designs by Van Cleef & Arpels, and images of her stunning Dior gowns and wardrobe. For the first time, Eva PerÓn's sisters have allowed exclusive access to private family photographs. Extensive captions include anecdotes and excerpts from Evita's impassioned speeches and letters, and with the photographs they offer much more than simply a visual record of Eva PerÓn's life: This book is a fascinating portrait of a legendary figure of the twentieth century.… (more)

LibraryThing member Salsabrarian
A woman of humble beginnings who found herself at the perfect confluence of time, place and people to become one of history's most intriguing figures. Coffee-table style book with plenty of black and white photos documenting her life. I did not know that shortly after her death Peron opposition banned and destroyed all images of Evita. Fortunately these were not lost.… (more)